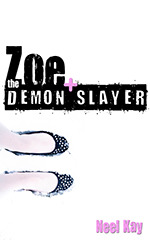 Neel Kay lives with her husband and two kids in rural surroundings in the south of Denmark, not far from the German border. She’s a trained milliner, studied English at university, and now works a day job as a web editor. But she’s been writing always.

Love coffee, scarves and sea views. Oh, and butt-kicking heroines who know how to swing a sword and aren’t afraid to get a little dirty.
Website / Goodreads / Facebook / Twitter
~Guest Post~
Ten random thoughts while writing Zoe + the Demon Slayer
1.   I’ll have this book ready by July, of course I will.
2.   I love this story. I want to live in this story. This story is so freaking awesome.
3.   Yeah, no, this probably won’t be ready before August. August 6th – yes, August 6th. Definitely August 6th.
4.   Oh hey, look! What a pretty *insert distraction*.
5.   Wait a minute…! Was that another deadline that just whooshed by? Hey, where do you think you are going?
6.   What the hell is this? I can’t publish this. I suck like no one has ever sucked before, maybe even worse than that.
7.   September?
8.   You know, this might not be half bad. I think. Maybe.
9.   I love Zoe and Matis so much! I should write a book about their son. He’d probably have gorgeous dark hair and the most dazzling green eyes ever.
10.                Fine! October it is. I’m booking a blitz, damn it!