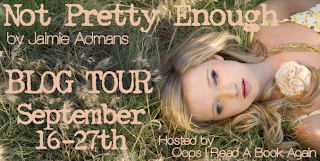 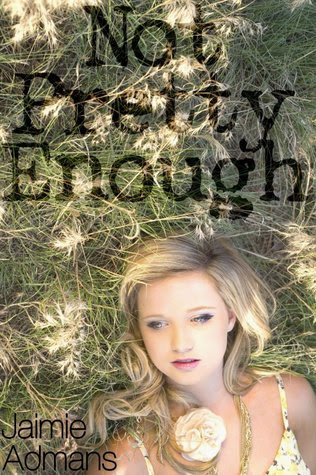 Not Pretty Enough by Jaimie Admans
Publication Date: August 1, 2013
Genre: YA Comedy Contemporary
Pages: 191
Goodreads
~Summary~
“New Year’s Resolutions:
1. Lloyd Layton will know I exist. He once said three whole words to me, so this is obviously progress. If I don’t get a proper conversation out of him soon, then I’ll take my top off and streak through the cafeteria, because nobody could fail to notice these boobs.
2. I will not get expelled for streaking through the cafeteria.”

Those are the words that begin her mission.
Chessie is fourteen, not pretty enough, and very much in love. Lloyd Layton is hot, popular, and unaware of Chessie’s existence.
Her goal is clear: to get Lloyd to love her as much as she loves him, and she has exactly one year to do it.
As Chessie’s obsession with Lloyd reaches boiling point and she starts to spin a web of lies that spiral out of control, Lloyd turns out to be not quite the prince she thought he was. Can Chessie avoid the gathering storm before things go too far?
Purchase Link:
Amazon
~Excerpt~
I stare at the back of Lloyd’s shaggy brown hair as I follow him across the yard. He doesn’t know I’m following him, of course. I’m not even following him, not really. Not this time, anyway. Debs and I are just casually strolling across the yard towards the buses and he happens to be in front of us.

“Chessie!” Debs shouts at me just a second too late as I walk smack bang into the side of a bus.
Ouch.
Lloyd turns around at the sound of the clattering thunk I make.
Usually I like the sound of Lloyd’s laugh, but not today. Not when he’s laughing at me.
“You couldn’t have told me just a second earlier?” I ask Debs.
“Sorry,” she says. “I was talking to you and didn’t realise you weren’t listening until it was too late.”
Luckily the bus I’ve just walked into happens to be our bus, and I throw myself onto it with such force that I nearly come out the other side.
“You all right, love?” The driver asks. I ignore him and heave myself down into my seat with a huff.
I am all right. My boobs are so large they hit the bus before the rest of me did, otherwise I’d probably have a bruised face as well as the bruised ego. Once, just once, couldn’t these things happen to me when Lloyd isn’t watching? It’s not too much to ask, is it?
“Maybe if you spent more time watching where you were going and less time watching Lloyd, these things wouldn’t happen in front of him,” Debs says.
I hadn’t meant to say that out loud.
“But he’s just so… watchable.”
“I’m pretty sure he’s talkable to as well, you know, if you tried.”
The thing is, I have tried. Lloyd brings out the worst in me. He brings out the most nervous, clumsiest, downright embarrassing side of me that doesn’t even exist unless he’s in the immediate vicinity. Well, maybe it exists but it doesn’t show half as much if Lloyd’s not there.

Jaimie is a 28-year-old English-sounding Welsh girl with an awkward-to-spell name. She lives in South Wales and enjoys writing, gardening, drinking tea and watching horror movies. She hates spiders and cheese & onion crisps. She has been writing for years but has never before plucked up the courage to tell people. Afterlife Academy is her third novel and she hopes you enjoy it. There are plenty more on the way!

Website: http://www.jaimieadmans.com/
Twitter: http://twitter.com/be_the_spark
Facebook: http://facebook.com/jaimieadmansbooks
Newsletter: http://eepurl.com/oDXZj
~Interview~
1.       In Twitter style (140 characters), please describe Not Pretty Enough?
A romantic comedy: Chessie is desperately trying to get the boy she loves to realise she exists, but just how far will she go to get Lloyd to love her back?
2.       What interested you in writing Young Adult?
I love the genre. I absolutely love reading YA and I always wanted to try writing it, it was just a case of waiting for the right plot idea to come along!
3.       Which do you like writing better, Contemporary or Paranormal?
It’s hard to choose, although I think Paranormal just wins it because you’re almost unlimited in what you can write about. With Contemporary, you have to fit within the bounds of the normal world, but with Paranormal, you can invent anything and it will fit in if you’ve world-built well enough!
4.       What inspired you to write Not Pretty Enough?
I just thought it was something that most people would have been through. It’s certainly something that I went through when I was a teenager – being madly in love with a boy who doesn’t even know your name – I thought people would relate to it, and I thought it would make a funny novel as the main character gets more and more desperate for this boy to notice her.
5.       What made you to decide to Self-Publish?
I liked the idea of being in control of my own work, for one thing. For another was the time traditional publishing takes – I didn’t want to wait years, I didn’t want to spend months getting rejections, waiting months for responses, and eventually waiting years for a book to appear on the shelf. Self-publishing felt right, I’m a big believer in gut instincts, and it truly felt like the right time to do it myself.
6.       What is your favorite thing about Not Pretty Enough?
It was really fun to write! Every scene was pretty much a case of sitting there thinking, “what’s the worst, most embarrassing thing that could happen at this particular moment?” I tortured Chessie quite a lot, and I really enjoyed it!
7.       We all listen to music, what were the songs that helped you write Not Pretty Enough?
Not Pretty Enough by Kasey Chambers! You can see where it gets the name from! I don’t listen to music while I’m writing or I end up singing along instead of working! But each book has, I suppose you would call it a theme song – one or two songs that are stuck in my head while I’m writing and help evoke the atmosphere of the book, and Not Pretty Enough definitely did that!
8.       I see there will be a book two, how was it writing a series compared to writing your standalones?
To be honest, it wasn’t much different! Both books work completely as standalones, so although there are the same characters who are a bit older and wiser, there are also new characters and new conflicts. As the writer, the only difference that I really felt was how well I knew the characters – it was like going back to old friends rather than getting to know new friends!
9.       While reading Afterlife Academy I saw some slang words I never heard here in the states, mind telling us some fun ones we might see in your books?
Ha ha, my editor is always having a laugh at my British-isms! The thing is, I don’t really know which words you wouldn’t have heard over there, I use them in everyday life so it’s second nature to me! Let’s see… “Snogging” which is kissing, of course, and “getting a bollocking” is being told off for something. I changed one of the insults I use all the time due to it having a completely different meaning over there. “Chuffed” (really pleased!) “Crikey” (surprise!) “knackered” (really tired!)
Bloody hell and sodding or sod off are my favourite swear-ish type words! You probably know most of those, but I think they’re British words that appear in my writing quite often!
10.   Lastly, mind sharing six random facts about you?
- I love horror movies. The scarier, the better. I like a film that has me hiding behind the duvet and sleeping with the lights on.
- I’m addicted to tea. I can’t start the day without a cup of tea, and don’t really function unless I’ve had one!
- I’m also addicted to bad reality TV and talent shows!
- I have a massive crush on Aaron Tveit who played Enjolras in the Les Miserables movie last year!
- I love scented candles and perfume, and buy far too much of both!
- There’s a giant wooden ampersand sign on the wall above my computer!
~Giveaway~
a Rafflecopter giveaway

I had fun asking those questions and I hope you enjoyed them too, Jaimie. Also, reading through those excerpts it was extremely hard to choose which one to put up because they were all just so good! I seriously can’t wait to read this one day! J

Thanks for stopping by!
Posted by Ashley at 4:00 AM