Review: The Truth of the Matter

The Truth of the Matter (The Homelanders #3) by Andrew Klavan
Publication Date: November 2, 2010
Genre: YA Adventure/Thriller
Pages: 346 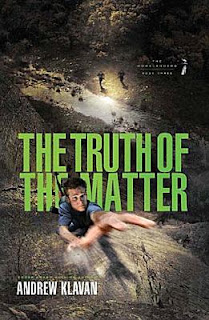 Summary
﻿
Ever since he woke up in a terrorist torture chamber--with a year of his life erased from his mind--Charlie West has been on the run. He has one desperate hope of getting his life back: track down the mysterious agent named Waterman. But in fact, reaching Waterman--and recovering the secrets lost in his own memory--will only increase his danger. Because a team of ruthless killers is rapidly closing in on him, determined to stop him from finding the answers. And the truth of the matter is more incredible...and more deadly...than he could ever imagine.

Okay, so, this had the feeling of being a filler. Does that mean I didn't like it? No, but I wish it was more than it was.


Not much actually happens in this one. Yeah, he does find Waterman. And he does get a lot of his memory back. But there was a lot of flash backs and strange dreams and not a lot of moving forward. Plot really didn't progress much. It felt like the author just wanted to get through some plot points and not really spend too much time on them. Sure, the flashbacks were fun and nice to have but they weren't really relivent. One covered something that was covered in the second book and the other ones really didn't help anything.


It's really just Charlie for most of the book. He really doesn't change. And you really don't get to dig any ddeeper into his personality. There wasn't any new characters that really mattered. There was Margaret but she wasn't that deep and I doubt we're ever going to see her again.


The writimg was fine, but it still was, mostly, a filler book. But I did liked it. Maybe it was just that I wanted to see if the story progressed and it actually became a part of the series, but it kept me reading. would I recommend it? Only if you read the other two books. And with all it's flaws and filler qualities, I still give it a 3.5.