These post I'll be doing for sundays and maybe on some saturdays depends if I'm craving more than one song and craving to share them with you.

Summer songs will either have the feeling like it's summer or just songs that I can't stop listening to. So the first summer song I want to give to you, my few readers, is Your song by Elton John. A favorite of mine that'll be used in my third installment to those who know about my other blog and about my book series I'm working very hard at. :)

What brought my mind to this song was because yesturday when me and the fam sat down to watch the recording of Haven, a syfy original, and it was the ending scenes song but sung by a female, Ellie Goulding, whom sings it very nicely. Apparently the song is so beautiful no matter who sings it I still get chills. :)

So enjoy both versions, 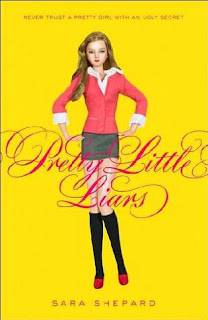 The read was fast, easy, and enjoyable. Even more enjoyable if you watch the abc family series.

In this first installment you meet four teenage girls that use to be as tight as sisters. Until one fateful night that turned their whole relationship sour....and I'm not talking about Ali's disappearance.

Hanna, Aria, Spencer, and Emily all became friends because of one common denominator, Alison DiLaurentis. They were now the 'it' girls and being the it girls always come with a price. Alison said secrets are what kept them close and they trusted her. But they never thought that it would backfire.

The summer between seventh and eighth grade they decided to pull a prank on the boy next door. However, it backfired on them and they accidently got the wrong person. Keeping it to themselves caused their friendships to start to crack, showing some of them how truly cruel Alison was.

One night during that oh so awful summer they were hanging out in Spencers barn until the lights went out and Alison became missing. Three years later and the girls live completely different lives until someone named A starts to send messages to them. A whom they strongly believe is Alison's way of coming back, except why would she do it in such a mean way of bringing up the past and threatening the poor girls.

Hanna is the now skinny 'it' girl whoms dating the boy she's been in love with since the seventh grade. But sadly is slowly descending back down to dorkdom.

Aria has finally found herself thanks to the move to iceland. However when she comes back to Rosewood she starts to feel like her old self again until she meets hottie Ezra at a bar, whom loves to hear her talk about literature. Except she'll find out soon enough that there'll be a big wall blocking the way for true love.

Spencer, the one who's been competing with her older sister, Melissa, since she can remember. Just this time when her sister arrives she has the upper hand and is finally getting the attention she's always wanted. Until she messes it up becuase when she can't have something she always wants it.

Then there's Emily, the quiet goody to shoes whom always is listening and does whatever her parents tell her to do. That is until new girl, Maya, comes to town and makes her think about who she really is. And of course the new Emily is someone whom her parents don't like.
To tell you the truth about Emily, she was the hardest to visualize, which is saying alot becuase I do watch the tv show. So it should have been easy but it wasn't. She just didn't stand out at first like the other girls did. So in the begining when ever I was reading her sections I would have to stop and think about who I was reading about.

However that was the only down side. Everything else was great and I can't wait to read the next one. The chapters were short, you were able to get sucked in and not think about anything but the story. I was pleased when I got through halfway of the book on the first day I got it because I haven't been able to that in a long while. Not saying the books I've been reading aren't good, they are in their own little ways. Its just I have a crazy life sometimes, that's all.

Warnings: there are cuss words, one teeny tiny pot scene, and yes there is the occasional sex talk. But what do you expect, they're teenagers after all. And yes, girls can talk about sex just as much as guys can, so no double standards, okay.