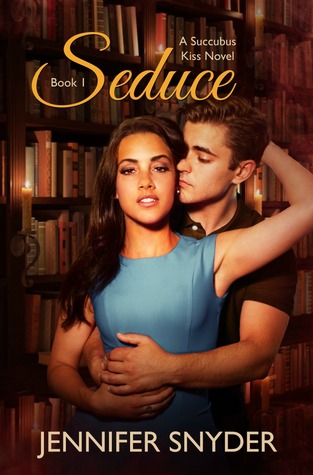 Life isn’t so bad for succubus, Kenna Blake. True, she seems to be the only succubus with a conscience and a specific strategy for finding her male meals, but she has a cute new apartment, a budding graphic design business, and the most unique friends she’s ever had.


Her personal love life, however, is non-existent.
Until the legendary vampire Randal Vincent sweeps into her life. Even though he isn’t someone she set out to date, at least she can kiss him without killing him. But when you’re dating someone who’s the inspiration for Dracula, there are bound to be a few hiccups along the way…


What really got me interested in this was that it's about a Succubus, I've never read a book about one before (that wasn't my own). So it was fun to read about Kenna, how she dealt with the need to feed. I really liked Jennifer's take on Succubus', I really enjoyed how Kenna saw aura's. Though I wished Mrs. Snyder exampled how Kenna found and came to be friends with other supernatural creatures as Kenna can tell which supernatural being is which just from their aura's.

There's tons of them which makes this read feel like an Urban Fantasy as it feels like there's not many humans where she lives, but it's not and there's still plenty of them. I just wished we knew how she found out which certain clubs and restaurants hosted only supernatural creatures and how she came to being besties with a vampire. Again, I really wished there was a story for the time between Seduce and the prequel Kiss of Awakening as this story is a year later after the prequel. I would love to know what happened in that year!

I really liked this introduction to the series, I enjoyed getting to know Kenna the Succubus but I honestly didn't feel like this was a romance. Yes, she has the hots for Randal and he has the hots for her. They date but I feel like her being a succubus, needing to feed, overpowered the romance. I just wasn't feeling it and honestly, the guy on the cover just doesn't feel like who Randal is. He just looks too boyish to be a vampire that was the one to inspire Dracula. I know it's silly but I'm a very visual person and the guy on the cover just doesn't fit the character of Randal. I would think more of the guy who played Aidan in the American version of Being Human.

What I think drove this story for me was learning how Kenna lived as a Succubus and her friends. I absolutely loved Dex, he was a hoot and I loved that he was so protective over her. He definitely stole the show when he came into the scene haha.

The only thing that didn't feel right besides the image of Randal on the cover, was that I felt like there was no hiccups like she puts in the summary. If the few scenes with Randal's ex, and Kenna's vampire besties are both jealous over the fact that he took notice of Kenna over them is a hiccup, that doesn't really satisfy me. But if you count the unexpected drama at the end, and what's going to drive the plot of the sequel, a hiccup then I'm satisfy there. And what an unexpected turn! Kenna, you were so naive (the only moment she was). Why did you go near that guy, didn't your dad teach you to not talk to strangers?! haha. Because of this ending, I bought the sequel right away! I just need more of this series and answers!

Overall Seduce was an enjoyable read! Though sometimes I didn't feel connected to Kenna, I felt more connected with her in Kiss of Awakening before she found out she was a Succubus, I was entertained by her story! Like I said, I need to know what happens next!

Jennifer Snyder lives in North Carolina were she spends most of her time writing new adult and young adult fiction, reading, and struggling to stay on top of housework. She is a tea lover with an obsession for Post-it notes and smooth writing pens. Jennifer lives with her husband and two children, who endure listening to songs that spur inspiration on repeat and tolerate her love for all paranormal, teenage-targeted TV shows.