{Book Blitz} No Such Thing as Perfect by Sarah Daltry

For Lily Drummond, life is about following the rules. To be specific, her mother’s rules. College fit into the plan – maintain perfect grades, date the perfect guy, and live the perfect life. On her own, though, Lily realizes that she doesn’t actually have a plan. Without being told what to think and do, she keeps making mistakes.

Away from home, the perfect facade is beginning to shatter. When Lily herself starts to break, it’s the support of an unlikely friend that teaches her how much of a lie perfect really is – and how to be whole on her own terms.
No Such Thing as Perfect was inspired by Sarah's Flowering series, but it stands completely alone as its own title. The same characters appear and some situations are similar, but this was written with a different goal in mind. There is NO on-camera sex in this novel and it is not a "romance" novel by most standards, but a story of growing up and being okay with who you are.
Amazon / Smashwords / Kobo / Paperback
~Excerpt~
The glow-in-the-dark stars look pathetic in the darkness. There are only about twelve and they don’t look like the night sky; instead they look like they got lost in the black and can’t find their way back to light.
Derek’s snoring, having fallen asleep quickly, but I can’t stop thinking. My mind is doing that thing it does when I overanalyze and make problems where there aren’t any and I want to turn it off. I want to be happy with my boyfriend’s arm draped over my body. I want the closeness to feel like it should.
Maybe I read too many books. I guess I always thought being in love would feel comfortable. It’s not that Derek doesn’t try, but sometimes I’m so afraid. If he pauses too long when I ask him if something looks okay or if his upper lip twitches like it does sometimes when I do something wrong, I can’t escape the doubt. Worry is like an endless ocean and my arms are just too tired to keep swimming.
I slip out from under his arm and head to the bathroom. I don’t really have to go, but lying in the dark room isn’t putting my mind at ease and so I pace the hall. The lights flicker, poor illumination because they’re an afterthought; dorm halls aren’t somewhere people spend their time. I consider going to find Kristen, or texting Abby even though I know she’s in some foreign city and it will cost too much and she’s probably doing amazing things. I even consider calling my parents to admit something is broken in me. But I can already hear the arguments. I’m fine. Everything is fine.
“Scottie dogs? What a fashion statement.”
Jack’s coming out of the elevator, carrying a guitar case. I almost start to cry knowing someone is seeing me like this.
“Sorry. I was just…” I look around. I wasn’t just anything. I’m standing in the dim hallway by the elevator in the middle of the night wearing my pajamas.
“Yeah, I was just…, too,” he says. “Want some coffee? I hear the lounge is lovely at this hour. There’s all the Styrofoam a lady could desire.”
“I-” I’m about to tell him I have a boyfriend, that I can’t just drink coffee with him, but that’s dumb. What’s wrong with coffee? Derek’s asleep, I’m restless, and it’s just coffee. It certainly beats standing around by the elevator trying not to cry. “Sure. Coffee sounds good.”
“Awesome. Let me just drop this off and grab some, okay?” He gestures to his guitar case and I follow him. He’s just down the hall – in the guys’ wing – and I make mental note of his room number. I don’t know why I do, but it’s etched on my brain before I realize what I’m doing. 401. Jack in 401.
“Did your roommate go home for the weekend?” I ask. He opens the door, tosses his case into a dark room, rummages loudly and knocks something over, and closes it again, coffee in hand.
“I don’t have a roommate.”
“Oh. I didn’t know there were singles here.”
He stops and looks at his door, then down at his shoes. “It’s… a long story. Anyway, coffee?” When he looks up, there’s a distinct change in his expression. It’s pain wrapped in fear of acknowledging it; I know the look well.
In the lounge, he makes coffee, but the machine is old and the water is from the fountain in the hall, so the coffee just tastes like heat. There is no flavor or pleasure in drinking it, except it’s warm and it’s quiet in the lounge. Jack is picking the Styrofoam cup apart as he drains it. I don’t know why it feels like normal. I thought I knew normal, but suddenly this feels like what it should have been all along.
“So you’re not a freshman?” I ask.
“Junior.”
“Your major?”
“Game Design. And you’re English.”
“How’d you know?”
He’s finished turning the cup into pieces and he swaps the pile between his palms, looking at me the entire time. His eyes have danced through every human emotion in the few short interactions we’ve had. I didn’t know anyone had the kind of depth I see in them.
“Lucky guess. Plus you’ve read Sense and Sensibility several times, which seems like an English major thing to do,” he says.
“Yet you know the character names,” I point out.
“Yeah, but I’m not…” He shakes his head. I don’t know what the sentence was supposed to end with, but he’s not continuing. “Besides, you came out of Joliet Hall, which is Humanities. I suppose you could just be taking a lit class, but it seemed a decent guess.”
“Well, you’re right. I’m predictable,” I say.
~About The Author~ 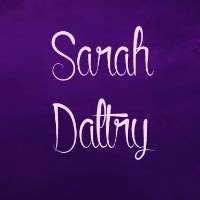 Sarah Daltry is a varied author, known best for the contemporary New Adult series, 'Flowering', a six-title series that explores the complexities of relationships, including how we survive the damage from our pasts with the support of those who love us. Although the books are no longer in print, they are being rewritten and redeveloped for future publication. Please visit Sarah's website for more details.
As a former English teacher and YA library coordinator, Sarah has always loved Young Adult literature and 'Dust', an epic fantasy novel where romance blends with the blood and grit of war, is her second official foray into YA, following the gamer geek romantic comedy, 'Backward Compatible'. Most of Sarah's work is about teens and college students, as it's what she knows well.

Sarah's passion in life is writing - weaving tales of magic and beauty. The modern and vast social networking world is an alternative universe that she makes infrequent trips to, but when she does, readers will find her attentive, friendly and happy to discuss the magic of stories and reading. Please stop by and say hello anywhere Sarah is online! You can find these places at http://sarahdaltry.com

Sarah has moved back and forth between independent and traditional publishing. Her first novel, 'Bitter Fruits', is with Escape, an imprint of Harlequin Australia, and she signed with Little Bird Publishing in the spring of 2014.

Sarah has also written 'The Love Song of J. Alfred Prufrock,' a reimagining of one of her favorite poems in a contemporary setting.

She is an obsessive Anglophile who spends more time watching BBC TV than any human being should, as well as a hardcore gamer and sarcastic nerd.


~Giveaway~﻿
a Rafflecopter giveaway
Thanks for stopping by!