Death Song: Liz is in love with Joe, but the monster of the lake has other plans for them.

Black Dog: Scarlet is engaged in a struggle for her sanity, but according to the voice in her head, she may be too late.

A Blue Story: When Katherine's beloved dog goes missing, she fears her strange new neighbor might be involved.

Dust Bunnies: Christiane faces her childhood arachnophobia and ends up confronting even greater fears in this test of sisterhood.

We Left at Night: Brooke and her family must abandon their home and their lives to make it out of a disease-plagued town overrun by zombies.

Girls & Monsters is for everyone who has ever been brave enough to confront their childhood fears...and lived to tell about it.

Death Song
Something catches in the back of my throat. I
hide my face in my hands to quiet the sobs. But then,
something ain’t right. Air moves around me and I
stop. I look between my fingers, but the blur of my
tears thickens everything: the bathtub, the towels,
and someone on the floor.
A woman’s in here with me, door still closed and
locked. An exhale, like after a deep swim, and a smell,
like the swamp close to my empty home. A chill runs
down my back, I wipe my eyes, rub and scratch them
to see more clearly. And I do.
Two gray hands scratch the floor tiles, nails green
with algae, putrid flesh sagging on her legs, arms
and torso, hair so long and wet and heavy, it drags
her down. Diluted, impossible to focus on, like little
waves rippling over her body from head to foot, seaweed
in the water. Scales and fins, mermaidlike, little
knives, those are. And they scrape the floor, like a
fork on a plate. It’s her—Limnade.
She opens her mouth of scissor-teeth and the rotten
smell of fish wraps around my throat like two
hands trying to choke me.
“You can’t be…” I don’t finish my breathless
thought and jump backward, knocking over the dish
of decorative soaps. Blurry waves, vision impaired,
out of focus, unreal. She crawls toward me, eyes unblinking,
lethal, hands inches from me: my legs refuse
to move, as my body feels like stone. Frozen,
hypnotized, a statue. Then I hear something coming
from within her…
A melody, reminding me of something lost, tickles
my ears. It drags on until the sweetness turns sickly,
vibrating into a full-on super-scream, hyenalike,
enough to pop my ears and make them bleed. Her
large mouth deforms her face into one gap of black,
the cry so high and strident, I scream from the pain.
Limnade stares at me, everything but her fades
away—Jo’s nice bathroom, Jo’s new life, Jo himself—
none of it matters anymore. Her fingers brush my
forehead, they’re cold and sticky like clams. And I let
the darkness take me away.
~About The Author~ 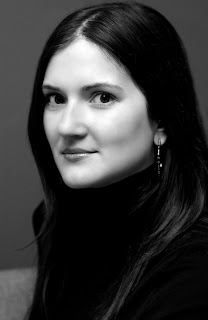 She who likes dark things never grew up. She never stopped listening to gothic, industrial and alternative bands like when she was fifteen. She always loved to read horror and dystopia and fantasy, where doom and gloom drip from the pages.

She, who was supposed to make films, decided to write short stories, novelettes and novels instead. She, who’s had her films listed on festival programs, has been printed in a dozen anthologies and magazines since.

She who likes dark things prefers night to day, rain to sun, and reading to anything else.

1. In Twitter style (140 characters) mind telling us why you chose to write about girls and monsters?
Girls & Monsters is a collection of five dark novellas about strong girls kicking monsters' butts.
2. What inspired you to write these shorts?
Mostly my dreams –  it sounds hippie-ish, but I have extremely vivid dreams with amazing story lines and great characters, lucky me. Death Song's first bathroom scene and We Left at Night's first act are beat by beat replicas of nightmares I had years ago. A blue Story was inspired by Perreault's Blue Beard, trips to the UK and an old friend of mine inspired Black Dog, and Dust Bunnies is my own homage to Christiane F, my childhood heroine.
3. Do you have a fear you need to conquer? Or did you already conquer it?
My biggest fear is failure, and I've lived through so many and survived. Wait, I did conquer it, after all!
4. Which short was your favorite to work on and why?
Black Dog, just because it's so dark and I got to write about schizophrenia, which fascinates and scares me equal measures. Losing one's mind is true horror for me, and this is how I explored Scarlett's descend into her mental illness: with the voice in her head, the scars on her body, and chaos engulfing her soul.
5. What made you want to write dark horrors?
It's not really something I want, it's something I was, am, and always will be. I've never been the kind of girl who waited after her prince charming, expecting to be saved and to live happily ever after – I've always known I preferred darkness and what lived in it. Give me feral vampires and vengeful ghosts, none of that sparkle and love crap.
6. What gave you the writing bug?
I was completing my Master's in screenwriting at the University of London, writing a screenplay (which is turning into a novel, keep your eyes opened for Rebel) when I realized I loved this precise moment when the voices in my head became alive on the page. I've never looked back, since.
7. If all your villains got in a ring and had to fight till the death, who do you think would win? The evil mermaid, the black dog, the creepy taxidermy, the giant spider, or the zombies?
If the fight's in water, I'll bet all my coins on Limnade, my killer mermaid. Otherwise, the zombies. Maybe if I trained my giant spider Bunny she'd damage all of them with her extra-long legs and sharp bite? See, I'll obsess about that question for the next few months, thank you very much!
8. What is your favorite horror book?
The Little Stranger by Sarah Waters – read it, just... read it. It's not only the unexplained paranormal activity every character endures, it's mostly the narrator's voice, who we cannot trust. Seriously, it's a must for anyone who wants to stop sleeping... until you finish the book, 'cause it's so good you won't be able to put it down. It's just the best ghost story out there, methinks.
9. What's next in store for your fans?
I'm finishing Girls & Aliens, which is a dark sci-fi collection of 5 novellas for YA; then ,I'm starting Girls & Ghosts, next. I'll be polishing Killer Girl, my YA/NA thriller in the fall and we'll be in 2014 by the time I start working on Rebel again, for the 354th draft.
10. Name ten random facts you want your readers to know about you.
I'm a giantess of 6 feet.
I'm afraid of heights, which makes no sense since I'm so tall.
I faint at the sight of blood, so bloody/gory scenes are out.
I used to make films, my three short movies can be found on the internets.
I collect creepy, old pictures with creepy, old people.
I still listen to goth, industrial and alternative just like when I was fifteen.
I don't eat meat, but I can't give up butter, ice cream or cheese.
I don't want to grow up, so don't talk to me about marriage and kids.
I don't believe in Santa Claus or the Easter Bunny, but I have great faith in Jack Skellington.
Anne I’m so sorry for question 7 but a girl just had to ask haha. If in the future you do come up with a better answer then come talk to me cause I got my own opinions for that question myself haha. You’re funny and your personality just shines through, I think you’re a very cool person and I can see myself getting along with. I also absolutely agree with you on some of your answers like for question 4 haha.
Anyways, thanks so much for finding me and coming to me about this tour. I had a blast and cannot wait for Girls & Aliens (absolute favorite “myth” creature) and Girls & Ghost (another favorite for me). Thanks for stopping by with the interview too. I’m sure just everybody is going to love it! ^_^
~Giveaway~
a Rafflecopter giveaway
Thanks for stopping by!
Sweet Readings Everybody!
Now, go get this book! You won't regret!