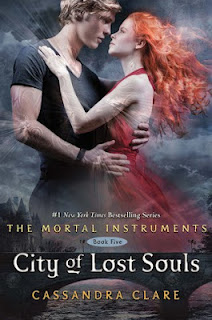 Summary
﻿
The demon Lilith has been destroyed and Jace has been freed from her captivity. But when the Shadowhunters arrive to rescue him, they find only blood and broken glass. Not only is the boy Clary loves missing–but so is the boy she hates, Sebastian, the son of her father Valentine: a son determined to succeed where their father failed, and bring the Shadowhunters to their knees.

No magic the Clave can summon can locate either boy, but Jace cannot stay away—not from Clary. When they meet again Clary discovers the horror Lilith’s dying magic has wrought—Jace is no longer the boy she loved. He and Sebastian are now bound to each other, and Jace has become what he most feared: a true servant of Valentine’s evil. The Clave is determined to destroy Sebastian, but there is no way to harm one boy without destroying the other. Will the Shadowhunters hesitate to kill one of their own?


There are five books in the Mortal Instruments series, this being the fifth. I liked all of them, but I think they should've stopped at three. The fourth and the fifth book are more like a new series than a continuation.


As the serpent's head drove down toward Clary, a shining blur slashed across it, almost blinding her. A seraph blade, its shimmering knife edge slicing the demon's head cleanly off.


Most of the characters are the same. You get to see more of Jordan and Maia, which is nice. The POV is mostly Clary's and Simon's, which I really like. Through the first three books, I always kinda wanted to know more about what he was thinking, and starting with book four, you get to. Anyway, the POV also cycle through a few other chacaters, one off the best part about the book.


I reads like other books of Cassandra Clare's. The lot was kinda differant from the other books of the series. But there were times when it kinda felt like I was reading fanfiction. And even though I liked the book, it was probably the worst in the series. And that's not because of the writing or the plot or the characters. It's just that it feels like the series is just dragging on. It has lost some of its charm, you could say. And I'm really glad that there is only going to be one more book in this series.


Now, the world the series takes place in is awesome, and I really like it. And I'm not saying Cassandra shouldn't write more shadowhunter books. I love the Infernal Devices, which is a prequel of this series. And I hear she's going to write a sequel series, which is great. I just think this series should end.

Now, back to this book. If you like the rest of this series, then you'll probably like this one. And even with all its flaws, I still give it 3.5 hearts.