The Serpent's Shadow (The Kane Chronicles #3) by Rick Riordan
Publication Date: May 1, 2012
Genre: YA Fantasy
Pages: 401 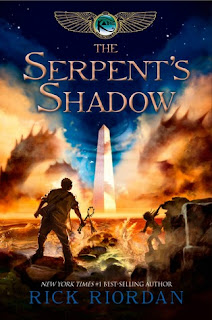 ﻿
He's b-a-a-ack! Despite their best efforts, Carter and Sade Kane can’t seem to keep Apophis, the chaos snake, down. Now Apophis is threatening to plunge the world into eternal darkness, and the Kanes are faced with the impossible task of having to destroy him once and for all. Unfortunately, the magicians of the House of Life are on the brink of civil war, the gods are divided, and the young initiates of Brooklyn House stand almost alone against the forces of chaos.

To find the answer they need, the Kanes must rely on the murderous ghost of a powerful magician who might be able to lead them to the serpent’s shadow... or might lead them to their deaths in the depths of the underworld...

I'm going to tell you this up front. While reading this my life kinda got turned upside down a little. And I'm pretty sure it affected my feelings for the book. So, I'm going to try and separate my feelings as best as I can. But I can make no guarantee.

The two ram-headed sphinxes stirred, their mouths glowing with flames. Then they lunged straight at me. Fortunately one of them slipped in a puddle of penguin water and skidded off to the left. The other would've ripped my throat out had it not been tackled by a timely camel.

Rick Riordan is one of my favorite writers. I love the Percy Jackson series and it's spin off the Heroes of Olympus. And I also am a big fan of the first two books in this series.

Most of the characters from the first two books are back, plus a few more. My favorite being Shelby, slightly crazy kindergartner magician. Carter and Sadie stayed pretty much the same, with little if not any growth. And the whole Sadie/Walt/Anubis was actually annoying.

The plot set up a lot like his other books, which was fine by me. Though, I don't think it read as well. The ending set seeds to make you thank there is going to be another book or a spin-off. And seeing as the Kane Chronicles is supossed to be a trilogy, so I'm going to go with spin-off series.

I really liked the book. Though, I didn't get the same giddy type of feeling I usually got from reading one of Rick's books. But that probably isn't the book's fault.