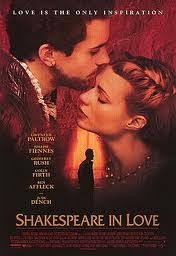 Will Shakespeare is a known but struggling poet, playwright and actor who not only has sold his next play to both Philip Henslow and Richard Burbidge but now faces a far more difficult problem: he is bereft of ideas and has yet to begin writing. He is in search of his muse, the woman who will inspire him but all attempts fail him until he meets the beautiful Viola de Lesseps.

She loves the theatre and would like nothing more than to take to the stage but is forbidden from doing so as only men can be actors. She is also a great admirer of Shakespeare's works. Dressing as a man and going by the name of Thomas Kent, she auditions and is ideal for a part in his next play. Shakespeare soon see through her disguise and they begin a love affair, one they know cannot end happily for them as he is already married and she has been promised to the dour Lord Wessex. As the company rehearses his new play...

I just adored this movie. The review down below I actually wrote for my styles of acting class, so I hope you enjoy. :)

This movie is most definitely worth seeing, whether you’re in it for the sweet romance or have a love for Shakespeare, you’ll enjoy this and get lost in this other world that once was.

With it’s over the top, crazy costuming for Queen Elizabeth (which I totally adored, all of it actually) to the custom clothes they wore in that period of time. With it’s natural lighting and sounds of a different world, they created a whole new setting for our eyes to experience and our hearts to fall helplessly into their time of elegance.

Dirt walk ways/streets, horse drawn carriages, and farm animals roaming the land just as much as the people did. A place that seems slightly simpler than ours yet be quite similar at the same time. A moment where the simply beautiful theatres had to be shut down for fear of the plague spreading yet when reopened had to fight for their time in the spotlight. 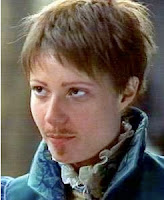 The actors and actresses all played their roles amazingly. Helping you immerse yourself deeper into the movie. They all stood out in their own ways, like- Viola De Lesseps, played by Gwyneth Paltrow, wanted to act so badly on stage that she dressed herself up as a man because in those times only men could be on the stage. A person with that much passion surely stands out in a crowd, a strong willed women she was. Will Shakespeare, played by Joseph Fiennes, was an inspiring young playwright. Distressed and tortured within he’s come to look for a muse, finding it finally in his love interest Viola.

I believe every character was great. No one really pops in my mind to who could be the weakest. I enjoyed them all. They all carried their dialog very well. Never once was I confuse or got lost even though they were speaking another language- Shakespearian/Victorian age.

Action, who doesn’t love a little action and sword fights are the best kind, right? Between two rivaling theatres we get a lovely scene of it, plus, a little comedy to go with it. Of course there’s other kinds of action, too. Like dancing and them acting on stage, even a little bet that goes on between Queen Elizabeth and Lord Wessex.

Over all this is a must see. This is a movie that’ll stick with you and leave you breathless. With its drama, its comedy, and its beautiful landscaping you’ll be swept up in this world and when it’s all over you’ll want to rewind the DVD and fall back into effortlessly.