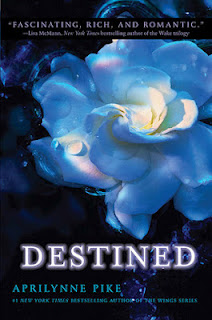 Laurel now knows the truth: Yuki is a rare Winter faerie, the most powerful—and deadly—of all, and Klea plans to use her to help conquer and destroy Avalon. But Klea's reach extends far beyond one wild Winter faerie. With Tamani, David, and Chelsea by her side, Laurel prepares to face what may be Avalon's final days, in the stunning conclusion to the Wings series.

Okay, before I start to review this book, here are some thoughts on the third one, 'Illusions'.  Because I will mention it later.

I disliked it some much you could almost call it hate. It was so, so slow. There was almost nothing in it that was important. Well, except the ending. The ending was pretty good. But other then that, it pretty much sucked. It was like a bridge between the second one and the fourth one. To me, it was just a wasted book in the series.

Now for the review on 'Destined'.

Tamani looked at her gravely, and reached up to tuck her hair behind her ear.

He hesitated for an instant, then his hands found the sides of her face, pulling her to him. He didn't kiss her, just held her face close to his, their foreheads resting together, their noses almost touching.


I love this book. It takes place pretty much all in one day, which was nice after the last book. And it takes place almost completely in Avalon, the faeries home world. There was a lot of action. Mostly fights between faeries and trolls.

Almost all of the characters return. And some don't make til the end, but I won't say who. Klea is the bad guy. She is really smart, diabolical strategist, and pretty much an all around badass. You learn a little more about Yuki, Klea's pawn, and I think it's kinda easier to understand why she is helping Klea. And Chelsea gets to go to Avalon, which is awesome.

There is a love triangle, Laurel/David/Tam, but it's been there from the start. And it does get resolved by the end. And there is a little thing at the end where you find out what happens to the one Laurel doesn't pick, once again I'm not telling who.

It was a great ending for the series. And I'm gonna miss it. It would be fun to read more about Avalon's history and culture. (Though if the author did that, please don't make Laurel the main character.) And it would be fun to know what happens to Avalon and the Winter Faeries after the book ends.  So, Aprilynne Pike, if you want to make a kinda tell all book about Avalon, it is okay with me.

Like I said before, I love this book. If you're a fun of the series, I think you'll be happy with this final book. And if you haven't read a book in this series, I say, go pick up 'Wings', the first book and start reading.