Body & Soul (The Ghost and The Goth #3) by Stacey Kade
Publication Date: May 1st 2012
Genre: YA Paranormal
Pages: 316
Goodreads 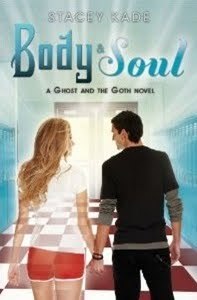 The final book in The Ghost and the Goth Trilogy!

The Ghost
I’ve been trapped in the body of Lily “Ally” Turner for a month now. Talk about a fashion crisis on an epic scale. What worries me more, though, is sometimes I catch Will looking at me like he thinks I’m Lily...or that he wishes I were. Without the good looks of my former self, I don’t know who I am, or if who that is is good enough. I need out of this mess. Now.

Will and I have been looking for a solution, one that would separate me from Lily without killing her. But it’s not going well. Then, when it seems like things couldn’t get any worse, we run into Misty, my former best friend and boyfriend-stealer extraordinaire, who claims she’s being haunted...by me. Seriously?

I’ll admit it. It’s really weird to look at Alona but see Lily. I do know the difference, though, contrary to what Alona might be saying. And Alona is more than a pretty face to me, not that she would believe that.

Our one lead for some help in this messed up situation might be a page torn from the yellow pages-—the “Psychics” section-—I found in my dad’s stuff. One of the “fakes” seems a bit more real-—and odd-—than the others. Before I can investigate further, though, Alona is off and chasing a ghost that’s probably nothing more than a figment of Misty’s guilty imagination. Now Lily’s family is freaking out because she didn’t come home, my mom is ordering me to stay out of it, and something is definitely wrong with the person formerly known as Lily “Ally” Turner...


Okay, now I know I said I was going to do a vlog for this review (that is if you follow my twitter, if not then okay) haha, but I decided that I do better actually writing out reviews. And this book deserves to be reviewed with great detail :)
The final fight for these two is coming to an end with a satisfying pleasure of hope from Stacey Kade.
This book was bittersweet for me. Bitter because this is the FREAKIN LAST BOOK in this amazing, addictive, seducing, and emotional series that I just love to death. But sweet because this was a great addition to the series with a fulfilling end that'll make all fans very happy.
All I really have to say is that, please Stacey Kade, I'm not asking for another novel (but that would be cool too, haha) all I'm asking is maybe sometime in the future can you at least update us on how Will and Alona are doing. Because you are the second author, out of my whole reading career (since 2009) to get me attached to a bunch of made up fictional characters and I love you for that ^_^, haha
Now the reasons behind my love for this kick ass series and why you, the reader, should pick this series up if you haven't already.
First, character development. Oh my god! There is so much growth within this book, series, it causes you to get attached to them. With Will, he comes out of his shell and finally takes control over his ghostly world and Alona, she grows a heart throughout this series it just makes you melt.
Second, the action. There is a lot of action in these pages that'll make your fingers crave to turn to the next pages in the book. In this one there's a fight scene, a couple fight scenes actually, between Alona and a big bad ghost. There's a conflict between Will and a former school mate. There's more of course but I'm not one to spoil.
Thirdly, the twist and turns. Wow, just.......wow. Stacey Kade just has this astonishing talent to pull the rug right from under us. I mean, how the bad ghost actually died. That.....that was just not foreseen by me. Throughout the series she always blind sided me with the unexpected. It made me crave for the latest book in the series.
And lastly, the romance. Oh how sweet and alluring was this slow blooming romance that Stacey Kade formed up in this lovely series. There were no love triangles, (woohoo ^_^) and there was no sight of insta love. No, this is the kind of love that forms right in front of our very own eyes, throughout the series. And I love romances that take their time to develop. It also gives me, the reader, time to fall for the romance that's brewing.
Overall, a must read. This series will not disappoint. And Stacey Kade is an author to look out for. Plus I soooooo can not wait for her next series that's coming out next year ^_^ Me excited, haha