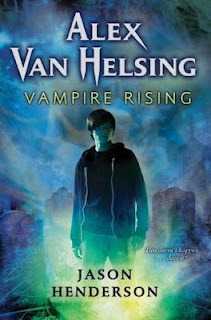 Fourteen-year-old Alex has no idea that he's descended from the world's most famous vampire hunter, but that changes fast when he arrives at Glenarvon Academy and confronts two vampires in his first three days. Turns out Glenarvon isn't the only school near Lake Geneva. Hidden deep underground lies an ancient university for vampires called the Scholomance. And the deadly vampire clan lord known as Icemaker? You might say he's a visiting professor.

When two of Alex's friends are kidnapped by Icemaker, it's up to Alex to infiltrate the Scholomance and get them back--alive. Assisted by the Polidorium, a top-secret vampire-hunting organization with buried ties to the Van Helsings, Alex dodges zombies, bullets, and lots--and lots--of fangs on his way to thwarting Icemaker's plans and fulfilling his family destiny.
This is one of those books that you hope for more than you expect. But expect more than you actually got.
There was a driver in the front who looked at them and hissed. Alex brought up his weapon and pumped a silver bolt into the creature's chest. Dust and flame erupted and evaporated.
The plot was very simple and straight forward. There wasn't any big twist or turn. The action scenes were decent. Though, Alex kept asking those questions and that got really annoying after awhile.
What's going on? A vampire is trying to kill me. What do you have? Nothing. What do you have? I have me.
Really? Did we really have to read that, like, four times. And we didn't need Alex to say this doesn't happen or this did happen ten times either. Another thing, they never explained what was so special about being a Van Helsing. Yeah, so he's related to the Vampire hunter from Dracula and he gets a feeling anytime he's near a monster, but he never did feel that special.
Alex, as a character, wasn't anything special, either. He just felt like a typical fourteen-year-old. The supporting characters were just that, supporting characters. They never took the spotlight and they never really got my interest. The best thig I can say about the characters is that they fit what the story is. It's about Alex fighting Vampires and even though Alex wasn't great, he was the main character.
The book wasn't bad and it has potenal. Will I read the next one? Yeah, if the library has it. Like I said before, I had a lot higher hopes for this than I got and I just wish it got a little closer to my hopes then it did.