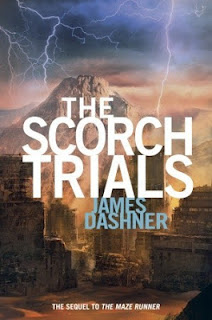 
Solving the Maze was supposed to be the end. No more puzzles. No more variables. And no more running. Thomas was sure that escape meant he and the Gladers would get their lives back. But no one really knew what sort of life they were going back to.

In the Maze, life was easy. They had food, and shelter, and safety . . . until Teresa triggered the end. In the world outside the Maze, however, the end was triggered long ago.

Burned by sun flares and baked by a new, brutal climate, the earth is a wasteland. Government has disintegrated—and with it, order—and now Cranks, people covered in festering wounds and driven to murderous insanity by the infectious disease known as the Flare, roam the crumbling cities hunting for their next victim . . . and meal.

The Gladers are far from finished with running. Instead of freedom, they find themselves faced with another trial. They must cross the Scorch, the most burned-out section of the world, and arrive at a safe haven in two weeks. And WICKED has made sure to adjust the variables and stack the odds against them.

Thomas can only wonder—does he hold the secret of freedom somewhere in his mind? Or will he forever be at the mercy of WICKED?
I loved The Maze Runner. It was one of my favorite books I've read this year. This one, not so much.


Thomas imagined horrible things as they went along. His legs were weakening every second, and he knew he'd have to lower his body to the ground soon. He pictured the bleeding wounds, the permanent scars.


I'll start off with saying, this felt unnecessary. I wish that Dashner just rounded out the first book and left it there. The plot was really weak. And I'm pretty sure Dashner made some off it up as he went along. It was confusing, too. There was some many twists that it was hard to figure out. And, I don't think one question I had after the first one was even answered.


I read a few reviews saying I would hate Teresa. I didn't mind her. I understood her a bit and understood why she did what she did. Though I understand her, I didn't love her. There were three characters I loved: Newt, Jorge, and Minho. Minho was tough, funny, and a likable guy. Newt was once again the voice of reason and my favorite. Jorge is a new character that is somehow crazy and lovable at the same time.


The character I disliked the most was Thomas himself. In the Maze Runner, at times, he wasn't likable. And other then the beginnig, he was never likable in this one. He was way to emotional and at times acted like a baby. I get it. She betrayed him. But she did because WICKED told her to. And she appoligized and said she didn't expect him to forgive her or to even like her. I'm not saying he had to love her or to like her, but I wanted him stop acting like he wouldn't have done the samething to her or someone else if WICKED had told him to do it. He acted like he was some much better then her. I just really annoyed me.


I've kinda ranted and that's not going to stop right now. There was a love square. Not a triangle. A square. Thomas and the Gladers are trying to survie an apocalypic wasteland, so it's the perfect place to add a love square. One of the most annoying things about the whole book.


I might be kinda hard on the book. If it was a stand alone and had nothing to do with The Maze Runner, it probably would've been so bad. But it is a sequel to a book I really enjoyed. And it might be because they aren't in the maze anymore. So it kinda lost some of its charm. I know I had the same problem with the last book in the Hungry Games Trilogy.


The book is getting a 2.5. It's not horrible but it's not The Maze Runner. And the library has the Death Cure, so I probably will borrow it and finish out the series.