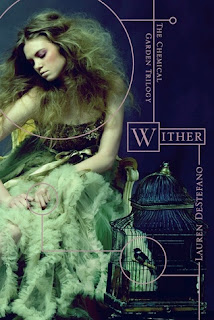 Whither (The Chemical Garden #1) by Lauren DeStefano
Publication Date: March 22nd 2011
Genre: YA Dystopian
Pages: 358
Goodreads
Summary
By age sixteen, Rhine Ellery has four years left to live. She can thank modern science for this genetic time bomb. A botched effort to create a perfect race has left all males with a lifespan of 25 years, and females with a lifespan of 20 years. Geneticists are seeking a miracle antidote to restore the human race, desperate orphans crowd the population, crime and poverty have skyrocketed, and young girls are being kidnapped and sold as polygamous brides to bear more children.
When Rhine is kidnapped and sold as a bride, she vows to do all she can to escape. Her husband, Linden, is hopelessly in love with her, and Rhine can’t bring herself to hate him as much as she’d like to. He opens her to a magical world of wealth and illusion she never thought existed, and it almost makes it possible to ignore the clock ticking away her short life. But Rhine quickly learns that not everything in her new husband’s strange world is what it seems. Her father-in-law, an eccentric doctor bent on finding the antidote, is hoarding corpses in the basement. Her fellow sister wives are to be trusted one day and feared the next, and Rhine is desperate to communicate to her twin brother that she is safe and alive. Will Rhine be able to escape--before her time runs out?

Together with one of Linden's servants, Gabriel, Rhine attempts to escape just before her seventeenth birthday. But in a world that continues to spiral into anarchy, is there any hope for freedom?
This was eerily beautiful….
…and I can’t wait for the next one. I wasn’t so sure about this book at first because of the mix reviews I’ve read from blogs I follow. However, overtime this plot was starting to win me over and the cover enchanted me. So, when I saw it at the library I just grabbed it and sure I almost hit my boyfriend, while I excitedly brought it away from the shelf, haha.
This book sucked me in from the first page. I was sitting in my boyfriend’s truck, waiting out the time while he was at the marine center and I couldn’t put this book down. Out of both my library books I got, I just couldn’t stop thinking and wanting to read this one over the other.
Anyways, we start off with Rhine, the main, being stuck in a van with many other girls. She was caught by the Gatherers and was now being chosen to become a bride. So, from the beginning, you get this creepy chill through your bones and it’s there pretty much throughout the book. And I loved that!
I really enjoyed Rhine, enjoyed the little flashbacks of her and her brother, enjoyed how she actually bonded with her other sister wives, loved them too. Including the first wife that they were replacing. Even enjoyed the connection she had with Gabriel, loved it wasn’t insta love, no. Their fond for each other grew like any relationship should grow.
This world was unnervingly fun. The father in law was creepy to the T and was a bad guy written perfectly. Her husband was charming and he truly loved, too bad he doesn’t know what’s going on behind the curtains his father has put up for him, he doesn’t really know what life is.
Overall, this was written smoothly, causing me to not want to put the book down. There are twist and unexpected turns, the world outside the mansion was beautiful and breathtaking. The world inside the mansion and underneath was suspenseful and I couldn’t wait to see what was going to happen next as I kept turning the pages.
If you have your doubts on this one, then do what I did, which was checked it out. But trust me, once you start reading, the book will not let you go….just like Housemaster Vaughn.

Most definitely recommend! Why haven't you picked it up yet!
Happy Reading Everybody!