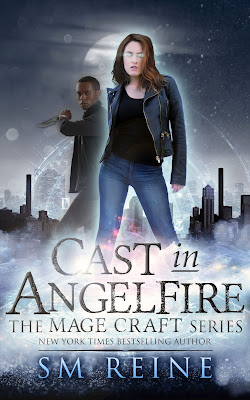 Nineteen-year-old Marion can’t remember anything before waking up at Mercy Hospital. All she knows that a lot of people want to kill her. And her would-be assassins are not human… Faeries are real. So are vampires and angels. They all want Marion dead. Surrounded by enemies, Marion turns to Lucas Flynn: a mysterious doctor as good with a gun as he is with a scalpel. He fights like a demon but claims that he’s human. And he’s hellbent on protecting Marion. Lucas claims that Marion is a half-witch, half-angel mage with terrifying powers that could crack the world. But Marion can’t remember how to cast magic any more than she can remember where she comes from. Marion must find her identity and her power…before the forgotten sins of her past catch up with her. ~~~ This series is urban fantasy romance unfolding over multiple books with an eventual happily ever after. It features some violence, mature language, and sexual references.


If only I finished this before hubby and I went on our vacation then I probably would have given this a four. But since I didn't my reading time disappeared and when I was able to finally relax enough to pick it up again something came along, distracting me. So as time went by I started to lose my interest and just wanted to finish the damn book haha. I hate when that feeling comes especially with a book I was enjoying.

Yes, this can be read as a standalone but I highly recommend you read some of Mrs. Reine's previous works first that way you can connect better to some of the characters. I haven't read all of her previous books because she writes so dang fast (I wish I knew her secret) that I just can't keep up but I have read enough to spot characters from her other works and then things click into place for me, creating a better enjoyment in me.

Like all her other works, Cast in Angelfire is packed with magical action scenes that keep you on your toes! I was devouring this, didn't want to put it down! And once pieces of the puzzle fell into place and I realized who the main guy was, my interest became even more piqued!

Though sometimes I couldn't stand Marion and her high and mighty attitude, I still wanted to see her safe. I'm hoping in the next book I'll see a change in her, especially after everything that's gone down but my hopes aren't high haha. And I also didn't like how naive and willing she was to listen to what everyone was telling her. In the beginning she was suspicious of everyone but the moment this cute guy says he's her boyfriend, her suspicion flies out the window when this moment she should have been suspicious. But I'm glad she even realized how naive she's been.

Overall I really enjoyed reading the latest story Mrs. Reine has written for us, I'm really amazed by how she twists these tales so that they all connect in some way and be apart of this urban fantasy world she's created! I'm truly amazed and I can't wait to continue this series! I'm excited to see where things lead to, this was a great starter for this latest series of hers. If you've enjoyed any other books by Mrs. Reine then you'll definitely enjoy this one!