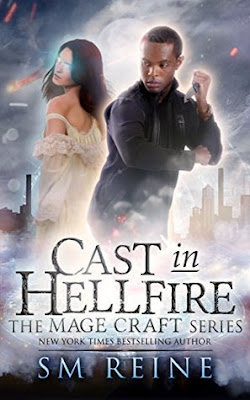 Marion Garin is the teenage daughter of Metaraon, the former Voice of God. Now she's also the steward of the Winter Court, which has been in anarchy since a revolution five years earlier. Problem: Marion still doesn't remember anything that happened before two weeks ago. Seth Wilder has a lead on her memories. Whoever stole them and sold Marion's essence to a demon lord in Sheol. Marion wants to help steal them back, even though that means abandoning the Winter Court to war. And Seth can't seem to tell Marion no. He wants Marion nearby. Very nearby. Possibly in his teeth. See, Seth has this little problem where he's developing a killing urge, and it seems to be centered primarily on the half-angel girl who adores him. It conflicts with everything Seth believes himself to be: a moral man, a doctor who heals instead of hurts. Yet he's obsessed with Marion. She wants her memories, and he wants her to have them as much as he wants her blood. They'll work together to make Marion whole, come hell or high water. Even if it means war. Even if it means Seth might hurt Marion. And damned be the consequences...


Ooh, that prince sure knows how to get under my skin! He's manipulative, sex craze, and pushy and I'm surprised I caught myself saying poor Marion when I wasn't her biggest fan in Cast in Angelfire haha. In this one I'm warming up to her, just only when she's around Seth I can stand her. But when she's with Konig I just can't put up with them....Ooh, that prince!

But I'm getting ahead of myself haha. I really enjoyed this one more than the first one and I think that's cause Marion is changing a bit, though how it ended we'll see where things lead to.

Cast in Hellfire starts where Cast in Angelfire left off and Seth (who's finally excepting his real name) is rescuing Charity from the preternatural detention center. There he realizes something is truly off with him and now he needs to find out what he's become. Of course to do that he needs Marion as much as she needs him.

I honestly enjoyed going along on this adventure with them. So much gory action! This horror lover was sitting on the edge of her seat! Seriously, I forgot how gory Mrs. Reine's stories can get and I absolutely loved it! If you're not a fan of heavily detailed gore then this story might not be for you haha.

So much is happening, so much is revealed, and I do enjoy the multiple points of view but I hate when the views change when one ends in tension and I just HAVE TO KNOW WHAT HAPPENS NEXT! Overall this is a great page turner, with twist and turns and constant action that it'll be hard to put down! I cannot wait to get my hands on the next one, not after finding out what Seth is! Oh boy, the next one is going to be quite interesting!