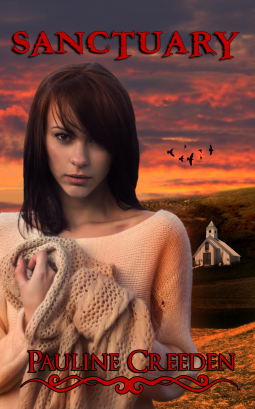 Sanctuary by Pauline Creeden
Publication Date: September 10th 2013
Genre: Young Adult Science Fiction
Goodreads
~Summary~
In a heart-racing thriller described as Falling Skies meets The Walking Dead, Jennie struggles to find a safe place for what’s left of her family. But it seems as though there is no place sacred, no place secure. First the aliens attacked the sun, making it dimmer, weaker, and half what it used to be. Then they attacked the water supply, killing one-third of Earth’s population with a bitter contaminate. And when they unleash a new terror on humankind, the victims will wish for death, but will not find it…When the world shatters to pieces around her, will Jennie find the strength she needs to keep going?

What the critics are saying:

Sanctuary is a fast-paced Christian fantasy thriller that is original and quite entertaining. The story revolves around Jennie and her family, Pastor Billy and his wife, and two brothers who are polar opposites of each other. Each chapter is presented in the point of view of Jennie, Brad or Hugh (the brothers), which gives Pauline Creeden’s Sanctuary, a multidimensional feel. The three different story-lines merge into a full-fledged fantasy/horror novel that never sags or lets up on the action. While there are Christian themes present in Sanctuary, and Jennie’s faith is an important part of who she is, I, a non-Christian, did not feel I was being preached to or proselytized. I recommend Pauline Creeden’s Sanctuary — it’s well-written and a lot of fun to read. –Jack Magnus for Readers Favorite

Pauline Creeden managed to mix more genres into one book than I could possibly imagine. The overall concept, aliens attacking the earth, is straight out of Science Fiction, but then you throw in a few zombies and post-apocalyptic fiction with how the dead/sick humans are acting. Overall, the entire story was charged with the adrenaline and thrills of a suspense/thriller novel, but the mood was terrifyingly eerie like a Horror story. There was almost too much sensory information for my primitive human brain to handle. Still, all of these genres combined made for one unique and fascinating story. This kind of book is of the same flavor as The Hunger Games with its originality, which I really appreciated. –Katelyn Hensel for Readers’ Favorite

Sanctuary by Pauline Creeden is a mixture of science fiction and faith. It is an apocalyptic story set in present day. Aliens have attacked the earth, affecting the sun and the water supply. As people wait to see what might come next, the aliens launch their most terrifying weapon, seeking to destroy mankind. As the story unfolds we see it through the eyes of a group of refugees from the Newport News area of Virginia. They have to find a way to stay safe, and hopefully find a weakness in the enemy to save mankind from extermination. This book was an intense page turner! Sanctuary has the perfect combination of action, horror, and humanity. I love sinking into a good book like this that is so well written you can see every little detail in your mind while you re reading it. I m a fan of zombie tales and that is what made me choose to read this book. It is so rare to find an original zombie apocalypse story, but if there is another one out there that mixes zombies, faith, and aliens all together I don t know of it. –Ginna Lamkie for Readers’ Favorite

In simple language, Pauline Creeden creates worlds that are both familiar and strange, often pulling the veil between dimensions. She becomes the main character in each of her stories, and because she has ADD, she will get bored if she pretends to be one person for too long. Pauline is a horse trainer from Virginia, but writing is her therapy.

*Book Spotlights are mainly dedicated to books I have received for review but have yet to get to them*
Posted by Ashley at 3:00 PM