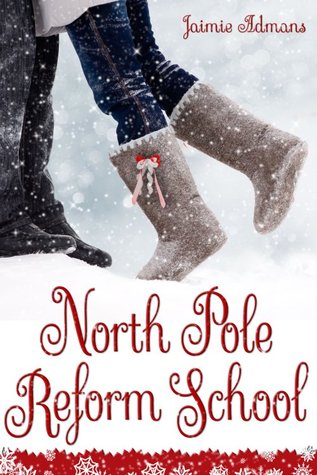 North Pole Reform School by Jaimie Admans
Publication Date: November 6, 2013
Genre: YA rom-com Fantasy
Goodreads
~Summary~
Mistletoe Bell hates Christmas. So would you if you had a name like hers. Her Christmas-mad parents make the festive season last all year, and with another Christmas looming, Mis doesn’t think she can take any more. After her carelessness causes an accident at school, it seems like things can’t get any worse.

Then she wakes up to find The Ghost of Christmases Ruined in her bedroom.

She is taken to the North Pole, to a reform school run by elves determined to make her love Christmas. Stuck in a misfit group of fellow Christmas-haters with a motley crew of the weird and even weirder, watched over by elves day and night, she doesn’t expect to meet cute and funny Luke, who is hiding a vulnerable side beneath his sarcastic exterior. She doesn’t expect to fall in love with him.

But all is not as it should be at the North Pole. A certain Mr Claus is making the elves’ lives a misery, and pretty soon Mistletoe and Luke are doing more than just learning to like Christmas.

A YA romantic comedy in which Santa is the bad guy, teaching reindeer to fly is on the curriculum, and zombies have a fondness for Christmas music.
-
Suitable for older teens and upwards due to bad language.
Amazon


It started with a purple moose.
At least I thought it was a moose. On reflection, it could have been a reindeer, but it didn’t matter at the time because it was obviously just a dream.
“Mistletoe,” the moose-reindeer said.
Yep. Still hate my parents for naming me that.
“Mistletoe,” it said again in a spooky echo of a voice, “I am the Ghost of Christmases Ruined, and I have come to tell you something.”
“Go away.” I turned over in bed.
“Mistletoe Bell,” it said sharply. “Listen to me right now.”
I sat up, suddenly wide awake. God, what a freaky dream.
“Mistletoe Bell,” it said again. I jumped out of my skin. I clutched the duvet to me as I turned around. Of all the things I expected to see, the purple moose sitting in the middle of my carpet and looking annoyed was about the last of them.
“Wh… what are you?” I asked quietly. I didn’t really believe my eyes. I must still be dreaming.
“I’ve tried to tell you already. I am the Ghost of Christmases Ruined.”
I tried to pinch myself awake without the moose noticing. It didn’t work. I didn’t wake up and the moose noticed.
“It won’t work,” the moose said. “You’re already awake.”
“I’m looking at a talking purple moose. I don’t think so.”
“You are Mistletoe Bell?” the moose asked.
I dropped my head into my hands and edged closer to the other side of the bed.
The moose continued to look at me expectantly.
“Unfortunately, yes. I couldn’t be anyone else with that stupid name.”
“It’s a very nice Christmas name.”
“That’s exactly the bloody problem. You try having a stupid Christmassy name in the middle of July or something.”
“Ah yes, but it’s December now.”
“Screw December,” I muttered.
“Aha,” the moose said. “This is exactly why I’m here.”
I gave it an angry look. “What the hell are you going on about?”
“Well, if you’d be so kind as to allow me to get to my point, I will enlighten you.”
I sighed in frustration.
“Mistletoe Bell,” the moose said, “you have been charged with ruining Christmas. Multiple counts over the years, but a particularly aggressive case this year when taking into account the fire—”
“The fire was an accident.”
It gave me a glare and I rolled my eyes. “Please go on,” I said, complete with a sarcastic hand gesture.
“As I was saying…” The moose had an annoyed tone to its voice now. “Ruining Christmas, multiple counts, we can’t let it continue. We’ve been keeping an eye on you for a while now. We were actually hoping you might grow out of it now you’re nearly seventeen, but the fire this year is the final straw. Mistletoe—”
“Please stop calling me that.” I interrupted it again. “It’s Mis, Misty, or nothing.”
The moose rolled its eyes. “I am required to call you by your proper name at all times. Now, can we get on with it?”
“Get on with what?”
“Mistletoe Bell, tomorrow you will be taken to the North Pole where you will stay until you can learn how to behave acceptably and stop ruining Christmas for others. You will be part of a group who will learn the value of Christmas to all involved.”
“That’s ridiculous. Who’s going to teach me? The polar bears?”
“The elves will teach you.”
“Of course they will.” I smacked my forehead. “Of course there are elves. I don’t know why I expected anything else from a purple moose.”
The moose made a frustrated noise. “Mistletoe, do you understand?”
“I will be taken to the North Pole and taught by elves? Yes, I understand perfectly.”
“I must be on my way. Sweet dreams, Mistletoe.” The moose got up and jumped out of the window.
I rolled over and went back to sleep. I must’ve eaten cheese before bed last night or something.
There were more weird dreams. I dreamt of flying above the rooftops and over the oceans, and it was really, really cold. I’m pretty sure I could hear strains of “Walking in the Air” in the distance.


I've read North Pole Reform School and enjoyed it very much, if you want to see what I had to say click here!

~Giveaway~
a Rafflecopter giveaway
~About The Author~


I absolutely love this girl and hope to one day be able to meet her! So please, help support her. Her work is so much fun! :)
Thanks for stopping by!
Posted by Ashley at 4:00 AM