Review: Roar and Liv (Under the Never Sky #0.5) by Veronica Rossi 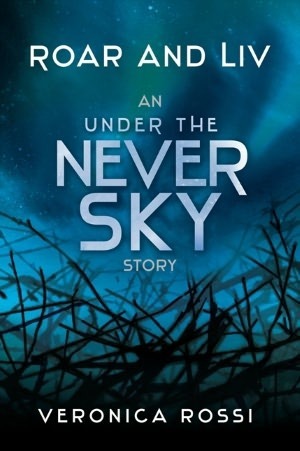 After a childhood spent wandering the borderlands, Roar finally feels like he has a home with the Tides. His best friend Perry is like a brother to him, and Perry's sister, Liv, is the love of his life. But Perry and Liv's unpredictable older brother, Vale, is the Blood Lord of the Tides, and he has never looked kindly on Roar and Liv's union. Normally, Roar couldn't care less about Vale's opinion. But with food running low and conditions worsening every day, Vale's leadership is more vital—and more brutal—than ever. Desperate to protect his tribe, Vale makes a decision that will shatter the life Roar knew and change the fate of the Tides forever.

Set in the harsh but often beautiful world of Veronica Rossi's "unforgettable" Under the Never Sky (Examiner.com), this captivating prequel novella stands on its own for new readers and offers series fans a fascinating look into the character of Roar. Poignant and powerful, Roar and Liv is a love story that will "capture your imagination and your heart." (Justine on Under the Never Sky)
~My Thoughts~

I enjoyed Roar’s character in Under the Never Sky and when Mrs. Rossi wrote a short about him and his love, I was so excited! Thanking god I was able to borrow this short from the library, I dove right in as soon as possible! It took me a while to fall back into this world and to remember the characters as it’s been a year since I’ve read Under the Never Sky but once I was able to figure things out, I couldn’t help but be sucked in! Why I haven’t gotten back to this series sooner is beyond me! Must get to the sequel!
Roar and Liv’s story was a reminder why I hated Vale! I get he needed a solution to save his tribe and just like any kind of kingdom or society, there must be sacrifices. But it doesn’t mean I have to agree with him or like what he does and what he does is devastating. Which is why throughout I hoped Perry would stand up to him….but I know that’s not until, Under the Never Sky haha.
Overall this was a good little tale and it makes me want to get to Through the Ever Night. Reading this reminded me how much I loved Under the Never Sky and its captivating world. So if you’re fans of this series, this is a must! Though I enjoyed this romance and hated how Roar and Liv’s story ended, I mean how could you just leave it there! I want to know what happens! I think I enjoyed Aria and Perry’s story more but that’s only because I fell in love with them in the first book.