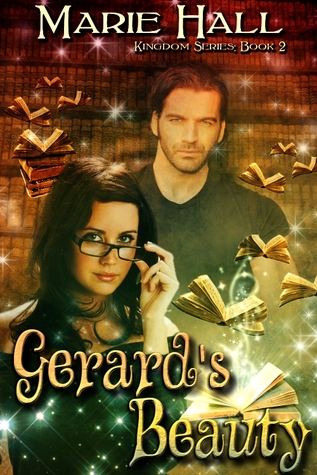 A not so classic retelling of Beauty and the Beast, as seen through the eyes of the villain...

Betty Hart has had it with men. Jilted in love, her life now consists of shelving books by day, watching too much Anime by night, and occasionally dressing up like a superhero on the weekends with her fellow ‘Bleeding Heart’ nerds. Men are not welcome and very much unwanted. Especially the sexy Frenchman who saunters into her library reeking of alcohol and looking like he went one too many rounds in the ring.

Gerard Caron is in trouble. Again. Caught with his pants down (literally) he’s forced to seek asylum on Earth while his fairy godmother tries to keep Prince Charming from going all ‘Off with his head’. Maybe, messing around with the King’s daughter hadn’t been such a great idea after all, not that Gerard knew the silly redhead was a princess. But his fairy godmother knows the only way to save his life is to finally pair Gerard with his perfect mate, whether he’s willing or not.

From the moment Gerard lays eyes on the nerdy librarian he knows he must have her, but Betty is unlike any woman he’s ever known. He thought Betty would come as willingly to his bed as every other woman before her, but she is a woman who demands respect and even… horror of all horrors… love. Is it possible for a self-proclaimed Casanova to change his ways?
~My Thoughts~
Beauty and the Beast is my all time favorite fairytale! Mix it together with Ms. Hall's writing and you'll get a fun, magical read!
Though the beginning reminded me of Her Mad Hatter (Kingdom #1) beginning, other than that, it was absolutely brilliant! Gerard is a manwhore, womanizer and when he gets charged with "forcing" himself on Prince Charming's daughter his Fairy Godmother has no choice but to send him to our world as she tries to help save his life. She's found him his true love and though his questionable about it, he'll do anything to get away. So when he lands in front of a library he wishes nothing but to go back.

Gerard once was in love with Belle but she left him for the rich and powerful Beast. She was a gold digger and looked down on people that didn't have the knowledge like she did. This is what turned Gerard into the man he is today and for this plot line it was love/hate for me (leaning more towards love though). I hated it because I absolutely adore Beauty and the Beast but I loved it because it was indeed a brilliant twist! Though he notices the similarity between his match and his ex Belle, it doesn't take long for Betty to break down his walls.

Betty is one feisty, independent woman and when her ex cheated on her she's become untrusting towards men. Especially men who look like players which is why Gerard gets on her bad side. Well that, and force making out with her to shut her up and looking like a drunk that sleeps on the bench in front of the library because he's not from our world. To say the least, there are quite a few funny moments that just sweep you off your feet!

These characters are a match made in heaven and when Betty decides to help out Gerard she landed herself unknowingly into her favorite fairytale! Ms. Hall's spin on The Beauty and the Beast was absolutely charming! It had me not wanting to ever leave this world she's created! With an evil Fairy Godmother (but only towards Gerard of course), a heart pendant that binds the two, and Gerard's....ahem....nonfunctioning parts and the only way to break the curse is true loves first kiss I couldn't help but get swept away! I honestly can't wait to get lost in the third book, Red and Her Wolf!


Overall, Gerard's Beauty is a short read that'll have you smitten with loveable characters, magical wands, and a sweet romance that'll be tugging at your heartstrings.