One in particular might prove the most delicious of desserts... 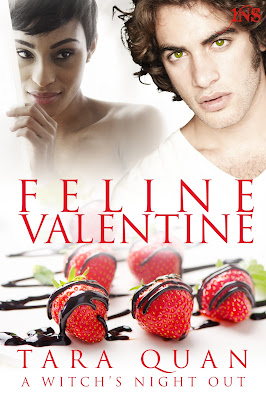 After moving in next to a ramshackle building on the outskirts of Washington, D.C., pastry chef Adrien Chatdurois is plagued by repeat sexual fantasies starring the same curvy brunette. In a state of constant arousal, he devotes his early mornings to grueling exercise and spends the rest of his day handcrafting the city’s best chocolates. When his younger brother stirs up trouble on the shop’s busiest day, the frustrated shifter is forced to pay a surprise visit on his reclusive neighbor. He soon learns not all witches are wart-covered hags, and one in particular might prove the most delicious of desserts.


“Stop hogging the binoculars. It’s my turn to ogle the warlock next door.”
Ignoring the high-pitched whine, Shelley Dupree zoomed in on a pair of sweat-slicked pecs. A prolonged spying session on her new neighbor seemed the perfect cure for Valentine’s Day doldrums. Though Dulcina, her best friend and cat familiar, could turn into an absolute pest when thwarted, the reward for tuning out her incessant requests superseded all risk. After all, Shelley needed to stock up on copious amounts of drool-worthy imagery. How else was a single witch on house arrest supposed to while away the most romantic night of the year?
Prolonged sexual frustration had long since warped her brain, part of the reason she couldn’t tear her gaze from the delicious male specimen on the other side of her crumbling wall. As she watched the man execute a strict pull-up over his doorjamb, her lips tingled. She imagined trailing them over his lightly tanned chest, pictured herself tracing those rippling muscles with slow, sipping kisses.
Her tongue darted to wet the corner of her mouth as she envisioned sliding her hands under the waistband of his red workout shorts. She’d fuel his arousal with teasing strokes before catching the fabric between her teeth and yanking the garment off.
His body lowered, filling her magnified view with a visage stunning enough to choke off her next breath. Thick fringes of sooty lashes framed dreamy, moss-green eyes. His pale skin darkened to a rusty hue as he sped up the repetitions. Glistening with perspiration, midnight curls clung to his sharp, slanting cheekbones. An overlong forelock snaked down to graze his pronounced nasal bridge.
With his lips pursed and eyes narrowed, the intense, menacing expression he wore added fodder to her prolonged sexual fantasy. She could almost feel his coarse chest hair rasping her chin and cheeks, taste salt as she explored the expanse of taut, supple flesh. Her pulse raced, her erratic heartbeat a warm flurry over each fingertip.
As if by magic, his waistband slipped down his hips, sending his shorts pooling to his ankles before they dropped to the floor. Entranced by the unexpected striptease, her attention zeroed in on his penis. Even from afar, the warlock didn’t disappoint.
With a contented sigh, she imagined tracing the ridge, swirling her tongue over the long, thick shaft before taking the engorged tip into her mouth. While she contemplated the way he might taste, deep grooves formed between his thick brows. His full, sensuous lips flattened into a grim line.
She closed her eyes and ventured deeper into the familiar daydream, a moan catching in her throat as his erection slid back and forth over her flesh. Instead of the binocular’s cold metal chilling her hands, the toned, flexing ass she’d always admired warmed her palms and fingers. She took him deeper, until she could almost feel the head brushing the back of her throat. A hoarse, masculine groan echoed between her ears when she hollowed her cheeks and—
“Meow!” A quintet of sharp claws swiped down her calf, the sudden pain shattering her erotic fantasy.
Spinning around, she nudged at the brown, shorthaired cat with her toe. Her friend must really want attention if she’d resorted to shifting into her hated feline form. A familiar stockpiled more magic as animal than human, so the amount of time her companion spent coughing up fur balls around the house directly correlated with the accuracy of her premonitions.
For whatever reason, the witch preferred to keep the future at bay.
“Damn it, Sweets.” She tapped her foot on the diabolical cat’s head. “Scat. If you don’t stop bugging me, I’ll tell your boyfriend you’ve been gawking at another man on a daily basis.”
Arching her spine in a sinuous stretch, the feline stuck out her tongue. 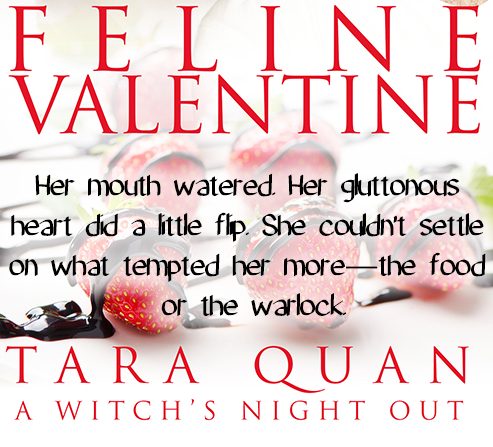 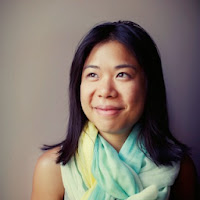 Globetrotter, lover of languages, and romance author, Tara Quan has an addiction for crafting tales with a pinch of spice and a smidgen of kink. Inspired by her travels, Tara enjoys tossing her kick-ass heroines and alpha males into exotic contemporary locales, paranormal worlds, and post-apocalyptic futures. Armed with magical powers or conventional weapons, her characters are guaranteed a suspenseful and sensual ride, as well as their own happily ever after.