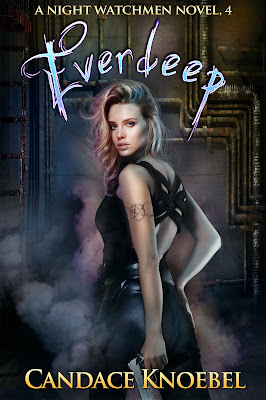 There are some sacrifices we never recover from…

Faye Middleton is at a crossroads in her life. After breaking the last seal and discovering their Rebellion camp was destroyed, she returns to Ethryeal City, determined to avenge the deaths of her mother and friends.
Faye and her team do what they can to keep their Coven intact now that the Priesthood has fallen, but with Darkyn attacks threatening the exposure of their kind, the Primeval Coven is close to being cut off by the United Nations.

Until Meredith, a mysterious Darkyn, appears, claiming she has information that will help Faye bring down the two responsible for the deaths of her mother and friends, and for the fall of her Coven. The only catch is that it requires returning to the very place she lost her mother—the Underground.

Not wanting to risk any more lives, Faye and Weldon agree to go with Meredith on their own. They know Faye will have to face the one machine every Coven is after—the Exanimator. No one who has ever stepped in has ever come out the same, if at all…

But Faye will do anything she can to protect those she loves, even if it costs her life.

Candace Knoebel is the award-winning author of Born in Flames-book one in a young adult fantasy trilogy. She discovered in 2009 through lunch breaks and late nights after putting her kids to bed, a world where she could escape the ever-pressing days of an eight to five Purgatory. And an outlet for all the voices residing in her head.Published by 48fourteen in 2012, Born in Flames went on to win Turning the Pages Book of the Year award in February of 2013. In January of 2014, the last book in the trilogy, From the Embers, was released, thusly completing the trilogy. She now works on the Night Watchmen Series, while guzzling Red Bulls and pretending to be a ninja on Heelys.