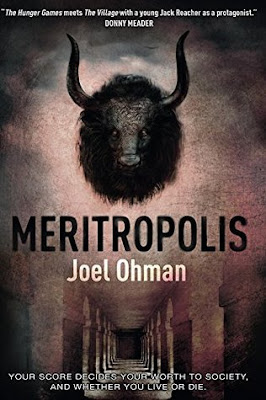 In Meritropolis everyone is assigned a numerical Score that decides their worth to society and whether they live or die. After a young boy is killed because of a low Score, his brother plots to take down the System.

The year is AE3, 3 years after the Event. Within the walls of Meritropolis, 50,000 inhabitants live in fear, ruled by the brutal System that assigns each citizen a merit score that dictates whether they live or die. Those with the highest scores thrive, while those with the lowest are subject to the most unforgiving punishment–to be thrust outside the city gates, thrown to the terrifying hybrid creatures that exist beyond.

But for one High Score, conforming to the System just isn’t an option. Seventeen-year-old Charley has a brother to avenge. And nothing–not even a totalitarian military or dangerous science–is going to stop him.

Where humankind has pushed nature and morals to the extreme, Charley is amongst the chosen few tasked with exploring the boundaries, forcing him to look deep into his very being to discern right from wrong. But as he and his friends learn more about the frightening forces that threaten destruction both without and within the gates, Meritropolis reveals complexities they couldn’t possibly have bargained for…


Though the summary explains the book perfectly and I liked it, I'm a very visual person so the cover had me expecting something completely different than what I got. So I was expecting like a labyrinth with a minotaur. Though that beast on the cover is in the book, the tunnel represented I don't understand where that comes from entirely. I feel like there should have been a fence with a forest behind it more than anything as that's what this book is all about. It's about the evil behind the fence and if you have a low score you're doomed to be thrown out into them.

Shrugs, anyways....I liked the book but it did take me a while to get into it. In the beginning there was a lot of information dumping and I feel like it was repeated throughout the story which had me rolling my eyes sometimes. Like, I got it. I can put two and two together, you don't always have to explain things and especially things you already explained to us before. And another reason it was slow for me was that we were bouncing between different point of views. Once I learned about every character I was able to flow through this a lot better.

When we were sticking more to Charley, the MC, I was able to really get into it more than any other point of view. Though I enjoyed some of the other ones as it brought another part of this world to the story, I was more excited to read about Charley and his fight against the system. And when he went out of the gates as he became a hunter for this system I really loved the action scenes we got with the mutant animals that exist in the outside world! I loved the crazy animal combinations! Some of them really seemed unbelievable but that was the fun part about them!

Overall there wasn't anything uniquely refreshing in this story as it followed the guide lines of a dystopian but I still liked it. I enjoyed the action scenes and their mission to shut down the system. I am interested to see where things go in the next one now that their world has crumbled around them and an outside force is barging in. 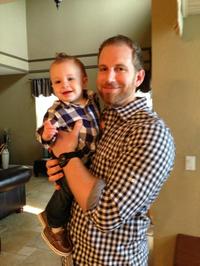 Joel Ohman is the author of the Meritropolis series --"The Hunger Games meets The Village with a young Jack Reacher as a protagonist". He lives in Tampa, FL with his wife Angela and their three kids. His writing companion is Caesar, a slightly overweight Bull Mastiff who loves to eat the tops off of strawberries.