Review: Message from a Hidden Past

Message from a Hidden Past: An amazing book, wherein an ancient dwarf sheds a revolutionary new light on our history & future by Jos Rogiers
Publication Date: December 28, 2012
Genre: Fantasy
Pages: 258 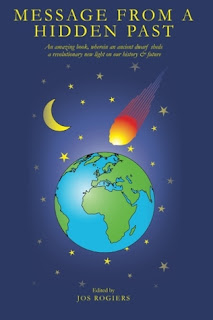 Summary
More than 3,200 years ago, a learned dwarf was pricked with the Sleeping Thorn and fell into a deep slumber in a secret cave somewhere on Earth. When he finally awoke, towards the end of 2009 or in the early part of 2010, he started to carry out the task he was charged with by his king: to reveal the truth about a hidden chapter of our past, that misunderstood period of our history when the so-called “gods” held sway over the world. He wrote an amazing book about this subject, a book that throws a completely new light on world history and human existence: Message from a Hidden Past.

According to the author, the gods were neither supernatural beings nor products of the human imagination, let alone extraterrestrials. He describes them as hominids of flesh and blood, belonging to the further evolved species of Homo supersapiens. They were smarter, taller, and much more beautiful than humans. They were the true founders of civilization. The book explains their origins, describes their culture, and pictures the land in which they lived. Most revealing, it relates how the gods became involved with humans and the disastrous consequences of that fateful interaction.

The dwarf recounts the story of a great world war that took place at the end of the Bronze Age and of an epic calamity that finally extinguished the Era of the Gods. Despite their physical destruction, the lore and images of the gods lived on in human poetry, song, and myth. The book’s last chapters deal with what remains of them today, and discuss ancient prophecies that foretell their return at an uncertain date in the future.
I'll be honest, I only read this because of a review request. It sounded a lot better than it actually was. And the summary is probably going to be longer than my review.
There is a lot of facts. It is obvious there was a lot of research put into this. And it's well written, even though I did find editting mistakes. The editting was a little annoying b ut the biggest problem I have is that it felt like homework. It is an intresting twist on history but it never got me hooked. I really didn't enjoy it that much.
I'm going to give two hearts because even though I didn't really like it, if history is your thing, you might. For what it is it's good. It's just not my kind of thing.