Review: The Prisoner of Cell 25 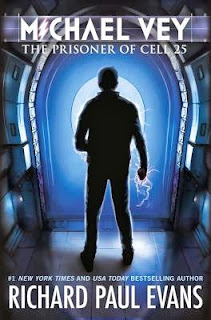 Summary
My name is Michael Vey, and the story I’m about to tell you is strange. Very strange. It’s my story.
To everyone at Meridian High School, Michael Vey is an ordinary fourteen-year-old. In fact, the only thing that seems to set him apart is the fact that he has Tourette’s syndrome. But Michael is anything but ordinary. Michael has special powers. Electric powers.

Michael thinks he's unique until he discovers that a cheerleader named Taylor also has special powers. With the help of Michael’s friend, Ostin, the three of them set out to discover how Michael and Taylor ended up this way, but their investigation brings them to the attention of a powerful group who wants to control the electric children – and through them the world. Michael will have to rely on his wits, powers, and friends if he’s to survive.
This is a very cliche ridden book. It is cheesy at times and predictable. That is my short review of this book.
The plot is nothing special. The book doesn't really pick up till the middle of the book. The ending is one of the cheesy parts. It's not bad, but it's not original.
The characters aren't very developed. They are pretty standard. It seems like the author tries to give his characters some depth at times but never seems to achieves this. Michael is a nerd who has powers. Ostin is his trust sidekick who doesn't have powers but is really smart. And Taylor is the cheerleader that all the guys love. Dr. Hatch is a normal villain.
The only interesting characters are the kids that Hatch kidnapped. They show the different relationships between kidnappers and their victims. And they are the only ones I really wanted to know about. Too bad they were side characters.
The book is nothing special. It wasn't bad, but was full of cliches. If you want something different and new, then get a different book. If you want something familar and easy to read, then give it a shot. I'm not sold on reading the next one, so we'll see if I do.