Book Review: Fangtastic! (My Sister the Vampire #2) by Sienna Mercer 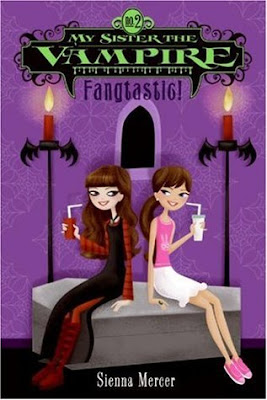 Olivia is a vegetarian. Ivy is a vampire. And they're twins?!?Ever since Olivia discovered that her long-lost twin sister, Ivy, is a vampire, she's been soaking up everything Ivy will tell her about Franklin Grove's vampire community. It's all top secret, and Olivia's sworn that she'll never tell another soul. But now, nosy tabloid reporter Serena Star is snooping around. As she gets closer and closer to the truth, it's up to Ivy and Olivia to throw her off track. This is one fangtastic news story that can't get out!


This was so much fun, I devoured it! As this snooty tabloid reporter starts snooping around because one of the boys from the vampire "gang" called the Beasts falls asleep in a coffin and then that coffin gets mixed up with another. When they begin to lay him to rest, he pops out scaring a mourning family and becomes a headline, we get way more of the vampire world than in the first one as Ivy and Olivia try to distract the reporter from finding out the truth.

And in this one the girls look more deeply into their adoption, trying to find out who their real parents are. But when Ivy found out that the vampire adoption system doesn't have anything about her adoption, that didn't surprise me in the least bit. I have a theory on why not but I won't talk about it 'cause I don't want to spoil anything.