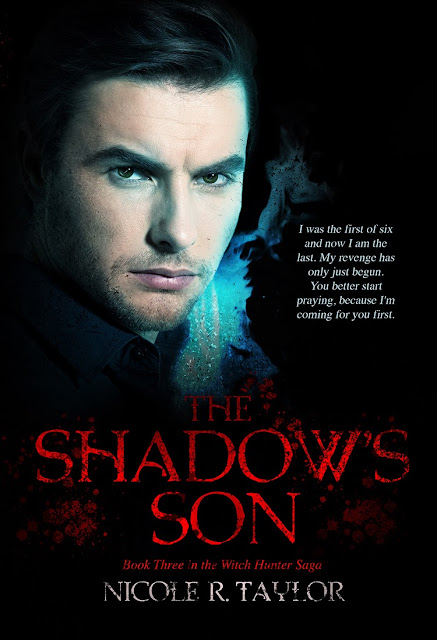 The Shadow's Son (Witch Hunter Saga #3) by Nicole R. Taylor
Publication Date: August 1st 2013
Genre: NA / 17+ Urban Fantasy
Goodreads
~Summary~
I am the oldest vampire alive and I am the most feared. Wherever I walk, death follows.
The downtrodden have the fiercest fire inside of them. Those are the vampires I want by my side. The pain they have been through only fuels their thirst for blood. Those I would ask to kill for me, simply because they bask in the glow of their true nature. The nature I created in my own image.
We are each our own devil and this world is our hell.
I was the first of six and now I am the last. My revenge has only just begun.
You better start praying, because I'm coming for you first.

When a mysterious stranger from Aya's past shows up in Ashburton it's not all good news. Tristan, a man she saved almost a thousand years ago, brings a warning that will affect not just her, but her new family.
Regulus is coming.
To protect Zac, Aya has to destroy the best thing that has ever happened to her. She has to pretend that their love has been a lie. But, is it really the right thing to do?
Aya travels to the other side of the world with Tristan to learn the secret behind Zac's blood and to hunt down Regulus before he can find them first. Tristan is her way into the Roman's circle, but she might just find that both her quests are more linked than she ever thought possible.
Heartbroken again, Zac must surrender to the darkest places inside himself if he ever hopes of coming back. Even if that means aligning himself with his greatest enemy. Even if that means turning his back on everything he's worked for and walking away from his brother, Sam.
Lovers are torn apart, friends are pitted against each other and families are splintered. But, what they find buried under the streets of London will change everything they've ever known about their world. Something that should have been left alone.

But, what Regulus does is the most unexpected of all.
~Sequel To~ Nicole R. Taylor is an Australian born paranormal, fantasy and contemporary fiction author. She is a graduate of the University of Ballarat Professional Writing and Editing programme and is a former music memorabilia sales person and grocery merchandiser.

She currently lives in Ballarat, Victoria, Australia with a two year old rescue cat named, Burger. She enjoys reading, writing (of course!), traveling and a little too much chocolate. One day she hopes to sky dive, but has to work up the courage first.

The first in her new paranormal fantasy series, The Witch Hunter Saga is available in e-edition and print from March 20th 2013