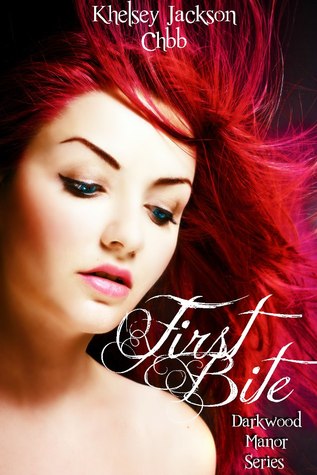 First Bite (Darkwood Manor #1) by Khelsey Jackson
Publication Date: March 11th 2013
Genre: Young Adult Paranormal Romance
Pages: 35
Format: Kindle
Source: Free on Amazon
Read: November 06 to 14, 2014
Goodreads
~Summary~
Victory isn’t your average seventeen year old girl. Her best friend is the only person in the world that knows her secret. She’s a vampire and is trying to come to terms with her own bloodlust she didn’t realize existed until she met Jason. Her mom wants her to learn who she is by sending her to a boarding school called Darkwood Manor. There she wrestles with her bloodlust and her unbinding attraction to Jason. Will she ever learn to control her blood lust?
~My Thoughts~
*I'm sorry to say but this book is no longer published. I went on Amazon to see if it was still free but found that it's no longer up on the site. I looked on Barnes & Kobo too but they too have no record of it. So for those of you that are interested I'm sorry that it's not available anymore. But to those that already have this short story I hope this review is helpful!*
I was about to give this two stars but I just couldn't, I just didn't like anything about it! Which is why this became my FIRST one star review. Congrats! (Was that a little mean?)

Why I gave it a One Star-

The Main character Victoria- I don't know if your real name is Victory, I can't remember, but she goes by Victoria. Anyways, she was sooo flipping annoying and so naïve! I know she's a teenager but she was just too much for me. And I hated she complained about always running out of blood bags! Oh my god! Is was ridiculous! She's a vampire that doesn't fed off humans, so her mom works in the hospital and "borrows" a few bags for them to live off of. And sometimes it's hard for her mom to get her hands on some so they can go weeks without eating- "drinking". So you'd think, instead of rushing through the few bags you got when you know it's not always easy for your mom to get some and you're used to starving, then why not be more careful and ration it out instead of always complaining you're running out! I mean, this girl can drink like three a day, yet the next moment she's complaining that she's almost out- no shit Sherlock!

And the author gives a reason for this little behavior and it's the main plot of the whole story- her bloodlust for Jason. The first guy she lays her eyes on, all of a sudden she has a reaction to him and bam, she freaking loves him. WTF? His blood sings to her and it so reminded me of Twilight (not in a good way). That's really the only other book that references that little vampire trait thingy that I can think of haha.

The romance in the book- I know it's a short story so things have to move a bit quicker but how can you love someone you don't even know! Like, seriously? You spoke maybe a couple words to each other and you're already in love. Cheese fest......this story was so flipping cheesy!

The dialog- just oh my god, cheesy! There was maybe one funny thing in the beginning of the book but the rest went down hill the moment Victoria got to the boarding school. Like no, just no.

Now the little things- Since she has this craving to suck Jason dry, do you know what her mom does, flipping sends her human best friend to the boarding school the next day- another WTF moment. But apparently he helps calm her down, so I guess that's fine and acceptable in the authors eyes?

Oh a random werewolf shows up at the end, another WTF moment. Like, all we talk about throughout the story is vampires because the main girl is one. But then we find out there's a hunter out there and then a random freaking werewolf comes out of the woods surrounding the boarding school?! Where did that come from?

Overall- this felt like a fan fiction, someone's fantasy, and not meant to be published. It was absolutely cheesy and I had no idea where the story was going. You didn't have time to connect to any of the characters and even for a short story, this was just too fast. The storyline felt like it was bouncing around and even the author just had an idea and didn't really know where it was going. (Maybe these are all the reasons why the author unpublished it?) Thank god it was free because the summary sounded way better than it actually was, the execution was just terrible! Really, it was like someone written it because they wanted their own cheesy vampire love story after watching another cheesy vampire love story (twilight).

But again, this is not a satisfying love story. Just a random, rushed story that was just an idea and not fully developed yet. I mean the author can do it, develop it more and make it less cheesy and I'm sure she would have an more interesting book. (So maybe that's why she unpublished it too?)