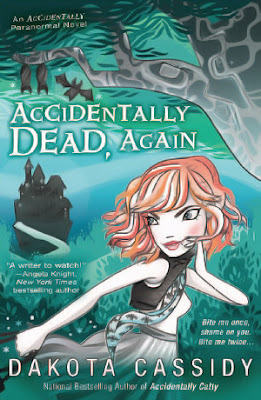 He was just looking for a night of fun. After a wild work-sponsored Halloween party, entomologist Sam McLean wakes up with a spotty memory—and a pointy set of fangs. Sam’s one-night stand wasn’t just dressed as a vampire; she had the bite to match. Somehow, Sam's unconscious body ends up at the OOPS office, where paranormal crisis counselors Nina, Marty and Wanda give him the down-low on accidentally becoming a creature of the night.What he got was an eternity of trouble.Dealing with a newbie like Sam is no easy task, but things get even more crazy when Phoebe Reynolds—a woman who claims to be Nina’s sister—storms into the office and causes a catfight that ends when Phoebe is accidently bitten by Sam’s recently formed fangs. Now, the OOPS girls have two fledgling vamps on their hands, and their powers—and the attraction building between them—are unlike anything they’ve seen before…

I'm head over heels for this author, I cannot get enough of her Accidental Series! Though, albeit I've only read the 5th and 6th book in the series, I'm craving to read the rest of them! And once we found out who the madman was with creating these new and improved vampires (for the most part, as they were keen to die horribly after a time) I'm dying to pick up the first book and read Marty's story! I'm glad when that reveal came to be that I didn't feel like I missed anything, instead the author made sure you were up to date with what was going on and throughout I was sitting on the edge of my seat when everything was coming to light!

I was hooked from the very beginning and how could I not be when Sam woke up on the steps of OOPS dressed in drag, finding out he's now a vampire. Then we find out the ever angry Nina has a sister who ends up getting bit by Sam as Nina is chewing her out. Lets just say it was the funniest way I've ever read anyone getting turned into a vampire, I was laughing so hard that I had to reread that part to make sure I read it correctly. Seriously, throughout, this woman had me in tears from laughing so hard! I couldn't get enough!

And it was hilarious watching Phoebe thinking the whole time that Sam was gay and just coming out of closet before she found out she too was a vampire now. When in truth he very much has the hots for her and he's just dressed up for a Halloween party. My god, the dialog is priceless!

So much happens in such a little bit of time that I'm quite impressed with Mrs. Cassidy's story telling! Completely immersed, not one bit of it dragged and I was constantly on my seat with the action! And then of course I was swooning as Phoebe and Sam got to know each other, I couldn't get enough!

Overall this was another load of fun with of course moments that just pulled at my heart stings! Oh the truth of another one of Phoebe's secrets, the feels! The twist and turns have me gripping with need to know what was going to happen next! And the sweet ending just wants me to turn back to the first page so I don't have to say goodbye to this amazing world Mrs. Cassidy has created! Will be buying more of this series!