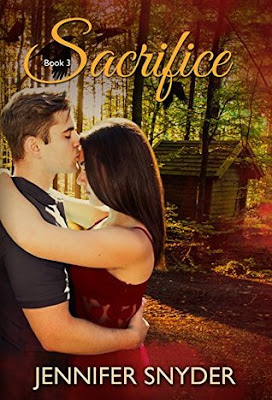 The battle between Kenna Blake and the wraith isn’t over… As the wraith grows stronger, Kenna is forced to follow the devastating path she has struggled to avoid since becoming a succubus. Her desire to free herself from him increases—but the cost of riding herself of the wraith comes at a shocking cost she isn’t willing to pay. Once she commits an unspeakable act while overtaken by the wraith, Kenna fears he has won and that she is out of options, as well as time. It is after this devastating moment occurs that a savior steps forward, willing to sacrifice eternity for her salvation. Will Kenna change her mind and allow someone to pay the ultimate price for her soul?


It was so easy to fall back into this world, I was devouring it! I did not want to put this book down! The wraith is stronger than ever and I didn't think he could get any creepier than he was but then Kenna finds a shed full of all the previous souls he's taken and yeah, major goose bumps!

Then the wraiths hunger takes over one night and something bad happens to her friend. The whole time I was practically screaming at my kindle "Don't do it Kenna" "You can fight it, don't do it". But of course she did the one thing I was yelling at her not to do and I could not stop turning the pages! This lead to an amazing twist, I didn't see it coming until it came!

Seriously a well crafted tale that I couldn't get enough of! There's so much drama and watching Kenna worrying on her own of what the spell takes to get rid of the wraith, it's one emotional ride! Though I was so happy when she finally told Randal! And his suggestion for her problem was a total shock and I was like, why didn't I think of that? Like, duh!

Also, swoon, when I read Seduce (the first book) I envisioned him as Sam Witwer who played Aidan in the US version of Being Human. But now I'm envisioning more of Daniel Gillies who plays Elijah from The Originals and boy am I head over heels for Randal now haha.

Elijah and Randal are the exact same character with the way they talk and hold themselves up so this is who I was thinking of the whole time! Let's just say I became very smitten over his character in this one!

Overall I really enjoyed the surprises around ever corner and boy were there a lot! Such a gripping tale! I'm sad to see this end in the next and final book! But even so, I'm dying to read it and see how things come together in the end!