Book Review: Embracing Her Wolf (Her Wolf #1) by Erin Hayes 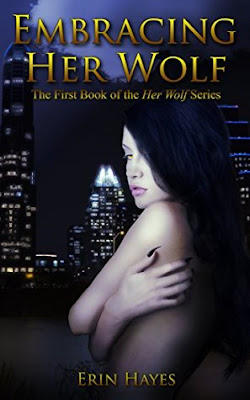 Not everyone wants to be a leader.So when werewolf Gemma Branford is expected to act as one for her pack, she wants nothing to do with the leadership and societal rules involved with being a werewolf. As a purebred Alpha female, her refusal to mate with any wolf in the pack has caused a stir, as this allows for any werewolf she chooses to become an Alpha male.When a rogue Beta wolf tries to take advantage of this, she realizes she has to stand and fight back for her right to choose a mate. Suddenly, it looks like her chance meeting with Adam, the lowly Omega wolf from a nearby pack, is her best chance of saving both her pack and herself.This is a paranormal romance novella with language, violence, and sexual content. Not recommended for readers under the age of 18.


I was craving for a quick read and decided to pick up this book by Mrs. Hayes, excited to see what her tale brought to the werewolf realm. I was sucked in from the very beginning, I didn't like when I had to put it down! I just wanted to get lost in this fast-paced world!

It was non-stop action, I was constantly on the edge of my seat and I couldn't get enough of it! Though the romance was fast I let it slide because they're half animal and they don't do a lot of wooing when it comes to finding a mate haha. Even though it was fast, it felt right for their world and in the end I thought it was sweet.

Overall I really enjoyed this and I cannot wait to read the next book! I will be diving into it as soon as I finish this review! Mrs. Hayes is very much becoming a go-to author for me!