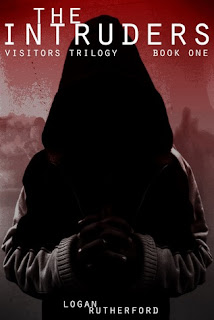 
The White House has been engulfed by the shadow of a mysterious ship. Days go by, and the Visitors make no contact, until one day, they leave. Suddenly the Earth goes still. Billions of people disappear at once. There’s no trace as to where that vast population has gone.

Seventeen-year-old Charlie Freeman and his cousin Alex, are two of the few left behind. While fighting for survival they join a girl named Sarah on her journey to Washington D.C. to rescue her little brother. The path they walk is riddled with the horrors, and strange creatures. They must overcome great obstacles before ending their treacherous journey.

Omg, this was such an entertaining read for me and I thank Logan, the author, for sending me a copy. :)
This is an action packed novel that'll keep you on your toes.
In the beginning we get to see the normal life of trouble maker Charlie Freeman before the Visitor's come. We get to meet his parents and their daily lives , the father Principal of Charlie's high school and the mother an author. I just adore the mother when the Visitor's come, it's so funny!
However, the Visitor's come in no time. Hovering above The White House doing nothing Charlie and his families life turns upside down. His aunt and cousin come down from D.C just to get away but in the end there is no place safe for anyone.....anyone human that is.
The Visitor's were creepy to the t. Their look, the way they acted, and the way they become one with a human. It was creeptastic. Especially this one scene very far into the book. Let's just say it makes you think over the whole book and then it'll just blow your mind because of what really is going on. It's a favorite scene of mine and I still can't stop thinking about it.
But, besides the non-stop action and the very exciting plot line, I did have a little problem with this book. Editing and a little over description, oh and if there is only two people in the scene- say the main character and another- I don't need the other guys name repeated over again. For example, I don't need to see this a few times- Alex said. Just say he said instead cause I got it the first time.
Now the edits were either miss spelled words, sentences not making any sense or two words that needed to switch places in a line. And the over description, say the main character is walking to a pond, well I don't need to be told over and over again in the sentences to come after the first one telling me he's walking to a pond.
Though, it might seem this book as a lot of edit issues, it really doesn't. They're spread out in the book so it won't bug you too much. Plus with this great story being told you'll forget about them.
Overall, with these amazing charters, creepy aliens, and fun dialog you'll be hooked and day dreaming about the second one, The Enemy. Which I can not wait for it to come out. I want to know more about the characters, mainly Rae, I want to know what she's hiding. And I want to see where Logan takes this. Plus, I enjoyed this book so much more because it had me thinking about my own alien book and I loved it for that.
I most definitely recommend & thanks again Logan. :)