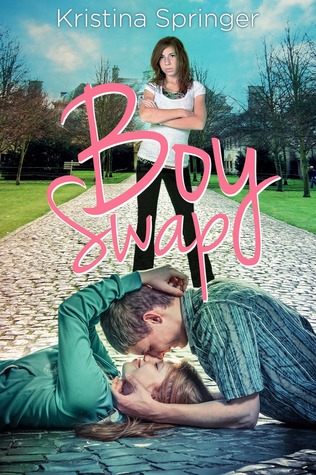 Boy Swap by Kristina Springer
Publication Date: October 16th 2013
Genre: Young Adult Contemporary
Goodreads
~Summary~
Boy Swap: The secret to sisterly love and scholarly bliss.Research shows that seven out of ten girl fights are over a guy. The Boy Swap Club fixes all that. In an effort to spread around male cuteness and minimize fights and backstabbing, they just share boyfriends. And Brooke Thomas, consummate band member, has been asked to join the super secret club because the president of the club has the hots for her guy.

Brooke doesn’t want to share her boyfriend. I mean, who does? But how can she say no? She, a second chair flutist in the school band, finds herself sitting between the Varsity Cheerleader Captain and the Homecoming Queen at the first meeting. Her friends will never believe this in a million years. Too bad she can’t tell them. But she knows. This one event can change her entire life. What if she becomes actual friends with one of these girls? It might be worth sharing her boyfriend.

Kristina Springer is the best-selling author of THE ESPRESSOLOGIST, MY FAKE BOYFRIEND IS BETTER THAN YOURS, JUST YOUR AVERAGE PRINCESS, THE PAPARAZZI PROJECT and BOY SWAP. She has a Masters in Writing from DePaul University and she resides in a suburb of Chicago with her husband and children. Read more about her at http://www.kristinaspringer.com. Follow her on twitter @TinaSpringer
~Giveaway~
You can win on ebook copy of Boy Swap.
To enter to win leave a comment down below either by answering these questions or not.
What do you think of the plot?
Would you join a group where they swapped their boyfriends? Me, hell no haha.
Once you're done leave your email address, format you want your copy in, and would you also like a bookmark too?
Thanks for stopping by!