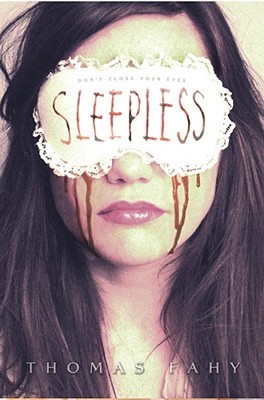 A few days after the first time you walk in your sleep, you kill someone. That's how the end begins.
Emma Montgomery has been having gruesome nightmares. Even worse, when she wakes up, she isn't where she was when she fell asleep. And she's not the only one. One by one the students of Saint Opportuna High start having nightmares, and sleepwalking. And the next morning one of their classmates turns up dead.
Something is making them kill in their sleep. Emma and her friends need to band together, to keep themselves awake until they can figure out what's behind the murders--before anyone else dies.
Thomas Fahy, author of The Unspoken, which Pubishers Weekly called, "a page-turner that just might keep readers up at night," again brings readers a nail-bitingly horrifying novel.
~My Thoughts~

Sleepless has the perfect set up for a Halloween read. You've got the blood, the nightmares, the classmates killing each other, the voodoo magic, and a very suspenseful mystery on your hands. Sounds perfect right? Well it is entertaining and can hook any horror fan for sure!
I loved the buildup of the present mystery with the past hurts of the cast of characters we have here. This is told in two point of views, one male and one female, with them both secretly liking each other. What book doesn't have a little bit of romance, right? I was excited about this subplot however it fell short for me. They hardly show each other their feelings for each other, however the moment they share a bed it just explodes out of them. Wtf is what I was thinking but I'm getting a head of myself.
A group of students went down to New Orleans one summer to help rebuild but they ran into some trouble. I don't want to say much but you'll see right away what truly happened down there. However I promise you'll be stumped on what's or who is behind the happenings of the present trouble.
The crazy things that happened in New Orleans followed them back home. The kids from the group are now having nightmares, very real nightmares but they don't know this yet. They start noticing these nightmares are coming true so they ban together and work together, making sure when one falls asleep they can stop them if they stir. Cause when someone sleeps bad things happen. And here is when the two share a bed and their true feelings show. I think I would have liked it better if they showed their feelings more to each other before but they never do, so this was kind of sudden. So I wasn't a big fan and which is why this relationship fell a little short for me.
Overall, I did enjoy this. I was hooked, especially at night when I read this. Though I don't recommend if you have a very powerful imagination haha. Or if you want to go right ahead. These disturbing scenes can give a girl chills.
I think the only thing I didn’t like about this was why this person was doing this to the kids. I didn’t figure out who the person was till the author showed us but the reasoning behind it was just so lame. Like really?!? You’re doing all this for that, really?!? Seriously it needed more meat behind it to make this horror fan happy.