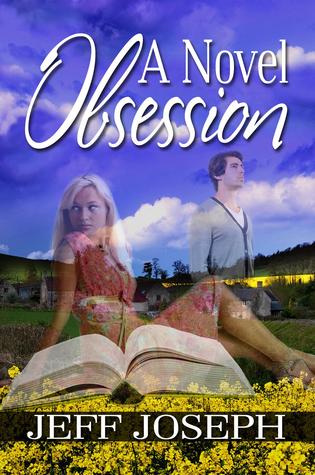 A Novel Obsession (Novel Series, #1) by Jeff Joseph
Publication Date: December 1st 2012
Genre: Adult Romance Suspense Thriller
Pages: 215
Goodreads
~Summary~
What could be more peaceful than a small town nestled in the plush and picturesque Appalachian foothills along the Ohio River? Seemingly nothing unless you actually live in such a place and experience the incestuous nature of the meddling, gossip, and desire that can fester there.

Abby Lane has cornered the market on virtue in her small town, yet there are forces that want to take that innocence away from her. Unfortunately, the depths of deception, often undetected by the pure of heart can be harmful to the unsuspecting soul.

As an English teacher, dreamer and hopeless idealist Abby immerses herself in romantic fiction to fill the void in her reality. There is one author in particular who speaks directly to her heart and she foolishly makes him the model lover by whom all suitors are to be judged. When others try to bridge that gap, idyllic small town America becomes a mysterious place to be.

A Novel Obsession is a great mix of Mystery, Suspense, Intrigue, and romance. It will answer the question:

As their faces slowly drew closer together, driven by forces that neither had ever encountered in their lifetimes, their eyes locked in a trance so intense that the rest of the world completely vanished around them. They were in a fourth dimension, completely mesmerized. They didn’t blink, as the spell was too strong, too consuming, and too moving. Unconscious tremors had begun. Suddenly their undeniable desires of the flesh became trivial; they no longer registered, only the overwhelming desire to be close, as close as humanly possible, even closer. Unconscious tremors continued. They inhaled the essence of one another as their scents mingled and became one, became them; they were quickly ceasing to be separate beings. Unconscious tremors were working their way to the surface. Finally and mercifully, their lips met. It wasn’t a kiss, but a physical joining of souls, the completion of a union ordained by a higher order. Tremors were becoming more conscious.


Then without warning, the tremors suddenly erupted into pure, unadulterated passion, an explosion of love that had no boundaries. She involuntarily leapt into his powerful arms, wrapping her legs around his hips pulling her center to his. In that same motion, her form-fitting skirt rose to her waist as if it had a mind of its own and her four-inch stiletto heels flew from her feet in different directions across the room. His muscular body responded to the challenge unconsciously by accepting the urgent, rhythmic contractions of her thighs, answering them with powerful thrusts of his own as he cradled her firm, round bottom in both of his hands, lifting upward, and squeezing her cheeks frantically at the same time. They crashed up against the nearby wall, neither aware of the collision. He turned and drove her into it over and over with such force, pictures fell from their perches, crashing to the floor without either of them being aware of it, and if they had been, they wouldn’t have cared. The inevitable eruption was growing more intense. Their mouths hungrily pursued one another as they tried to consume each other in bruising fashion, lips sucking wildly, tongues thrashing and probing deeper and deeper, all generating searing, wet, passion. Despite his athleticism, he reached a point where he couldn’t hold her up any longer, and he needed to create enough space between them to tear open her blouse. She would never wear that blouse again. He pushed her off. She had a fierce look of determination upon her face that said she would not be denied. He grabbed silk in each of his large, strong hands and, with one effortless pull, sent buttons flying in every direction. The strength with which he did this sent her into an uncontrolled frenzy. He jerked off her bra with nearly the same ease, as two full, firm, perfectly upturned, and beckoning breasts sprang forward. Her nipples were so hard and protruding, he could have hung coffee mugs from them. There was no planning, no thinking at all, only instincts, and instantly his mouth was suckling one breast voraciously while his other hand grabbed as much of the other as he could, squeezing it and kneading it until her head fell back against the wall and she involuntarily screamed with pleasure. His worn, tight-fitting jeans along with his boxers were around his ankles without his knowing how they got there. She held his fully upright, thick, and throbbing manhood in her right hand, as she would have the stick shift of a Maserati, squeezing it firmly, leaving no doubt who was doing the driving now.


He couldn’t answer her. He couldn’t speak any longer and he was reduced to breathless grunting.


With her left hand, she peeled her nylons and panties down her long, lean, shapely thighs and legs, and when they reached her ankles, she feverishly kicked them off. Once free from them, she shifted his erection into fifth and placed it horizontally between her legs. It was so extended now that the head protruded beyond her perspiring buttocks. She squeezed it between her thighs several times, reveling in its girth and firmness. Grasping his broad shoulders, she turned and took three steps backward, falling back on the bed pulling him down on top of her. With her legs bent and her knees pointing to the ceiling, she spread herself wide open to ensnare him, and with a look of desperation on her face moaned, “Please take me, please.”


He didn’t need any encouragement. He truly loved her, needed her, desired her beyond reason, and he would spend the rest of his life making her feel loved every waking moment of hers. They couldn’t wait a moment longer. Now both thoroughly wet with anticipation, he plunged himself deep inside of her in one fluid, yet gentle motion. At the same time, her body instinctively sucked him in. Their joining was hot and tight, a perfect, sensual fit. It was as if that was how they had begun before being cruelly separated somehow. At the moment of penetration, her eyes opened so wide he thought he could see the blood vessels pulsating on her retinas, and she moaned so feverishly it was obvious that she had not only lost the ability to talk but to scream as well. As their passion became interwoven, it was entirely about love and not sex. Both were on the verge of delirium as their centers sought and retreated, sought and retreated over and over, in a rapidly increasing rhythm until at last they simultaneously succumbed to their mind numbing, crippling, involuntary spasms, which allowed them to finally experience absolute and heavenly satiation. Once fulfilled, unable to move other than to stare breathlessly deeply into each other’s beckoning eyes while still interlocked at the hips, they had come full circle and they were back to where it all had started. No verbal communication was necessary as their consuming eyes did all the talking.