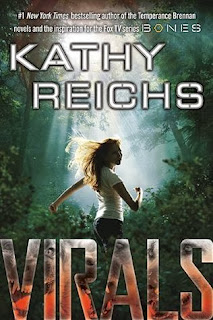 Summary
﻿
Tory Brennan, niece of acclaimed forensic anthropologist Temperance Brennan (of the Bones novels and hit TV show), is the leader of a ragtag band of teenage "sci-philes" who live on a secluded island off the coast of South Carolina. When the group rescues a dog caged for medical testing on a nearby island, they are exposed to an experimental strain of canine parvovirus that changes their lives forever.

As the friends discover their heightened senses and animal-quick reflexes, they must combine their scientific curiosity with their newfound physical gifts to solve a cold-case murder that has suddenly become very hot if they can stay alive long enough to catch the killer's scent.

Fortunately, they are now more than friends. They're a pack. They are Virals.
Okay, so I don't have that strong of feelings for the book. I did enjoy it. And I did like it. I just necessarily say why.
The plot was good. There really was two different plots that don't really intertwine till the end. I didn't mind that until it became clear that all we really would do was spend a little time on one then jump to the other one. It would've been nice if they connected more. And of course, as this is a start of a series, there is world building. So, that does slow the book down at times.
The characters were fine. Tory seemed a lot older than she really was. Things she said and did, didn't always feel like a fourteen year old. Ben, Shelton, and Hiram were good supporting characters. They complimented and gave a much needed contrast to Tory. I do wish there was another female character that was annoying, stuck-up, or slutty.
Overall, I enjoyed it. The action was fun, and if you didn't over think anything, it's an easy read. Yes, I had problems with it. And it definitely wasn't a masterpiece. But I would recommend it for an easy read and a fun book.