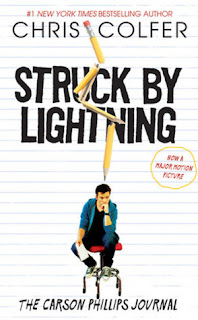 Struck By Lightning: The Carson Phillips Journal follows the story of outcast high school senior Carson Phillips, who blackmails the most popular students in his school into contributing to his literary journal to bolster his college application; his goal in life is to get into Northwestern and eventually become the editor of The New Yorker. At once laugh-out-loud funny, deliciously dark, and remarkably smart, Struck By Lightning unearths the dirt that lies just below the surface of high school. At a time when bullying torments so many young people today, this unique and important novel sheds light with humor and wit on an issue that deeply resonates with countless teens and readers.
I borrowed this book from the library because I wasn't sure about it. I was wrong. I really liked other than a few small things and one major thing.
The plot is nothing special. I liked it. It was an easy, quick read. It had a kind of charm that I just loved. I only had a few small problems with it. And there was only one that really took away from the book. And that was the ending.
Now I won't spoil anything, so don't worry about that. To me, the end didn't fit. It seemed like an easy out. It wasn't a happy ending, but it doesn't have to be to be good. I just think that if what happened didn't happen, it would've helped the book and would've made it more believable. Maybe other people liked it, but I didn't. To me, it almost made me give it an lower rating.
The main character, Carson Phillips, is kind of likable. He hates almost everything and complains a lot. But when he is not and he looks at the world around him, he is really likable. The other characters weren't really important. It was mostly just him. I think some characters should have, and deserved to be, explored further. Remy, Nicholas, and Malerie especially.
It's not a masterpiece. But it was entertaining and, like I said, had a certain charm. I only had a few small problems, only one that really took away from the book. So, in the end, I do recommend it, and as long as you keep expectations reasonable you will like it.