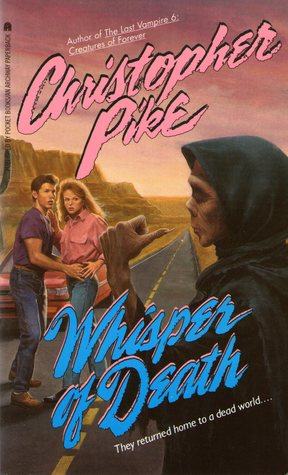 Whispers of Death by Christopher Pike
Publication Date: December 1st 1991
Genre: Young Adult Horror
Pages: 180
Format: Paperback
Source: Bought
Goodreads
~Summary~
Roxanne and Pepper are a teenage couple with problems. They leave their small town for a weekend to try and solve them. They don't really succeed, and when they return home they find their town empty.

They call other towns.

They find the whole world empty.

But eventually they discover three other Kids their Age who are still alive in the town. They cannot imagine why the five of them seem to be the only ones left of the entire human race. They have only one thing in common. They were each directly or indirectly involved in the death of Betty Sue - the plain, shy girl who committed suicide only a short time ago. Betty Sue - the quiet, brilliant girl who wrote short stories about each of them. Stories of hate, of revenge, of death in a dead world.

It makes them wonder who Betty Sue really was.

Or what Betty Sue was.
~My Thoughts~
I heard R.L Stine had the same style as Christopher Pike but after reading Whisper of Death I find Christopher Pike’s work so much stronger! His story telling is hypnotizing and absolutely spine chilling, much more in depth with his stories than R.L Stine.
I love R.L Stine books, don’t get me wrong. I mean, that’s where I get my fix when I want a little horror in my life but that’s all they are, a bunch a slasher books more than anything else. And that’s what I thought I was going to get with Whisper of Death. No, I was so wrong! Instead I got a skin crawling, huddled up in a corner kind of story! Reading this when its dark out is completely breathtaking! I was always afraid to look over my shoulder because it felt like someone was constantly watching me as I turned page after page.  I even felt like someone was about to grab me from behind! *shudders*
Yeah, so I can’t wait to read another book by him. I’ve got a couple more! Anyways, in the beginning this story took me by surprise but as things got moving, I was hooked! I just couldn’t put it down! My heart was racing and I was constantly sitting on the edge of my seat, sometimes the upcoming death scenes felt like the ones in the Final Destination series but these were so much more powerful than those. Ugh, my heart ache and I couldn’t wait to read what was going to happen next! And the mystery behind all that was happening, completely took me on a roller coaster!
Overall just the idea of being the only few people left in this world makes me want to shudder, to curl up in a ball somewhere. Christopher Pike writes the atmosphere perfectly, I felt like I was there with them, making this read so much more enjoyable! So if you like R.L Stine and spin chilling reads that’ll have you fearful then this is a must read for you!