Books for Nothing (57) Crushed & Bite Me 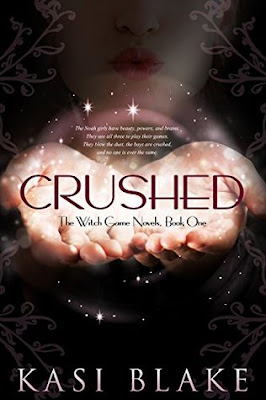 The Noah girls have beauty, powers, and brains.
They use all three to play their games.
They blow the dust,
the boys are crushed,
and no one is ever the same.
Each year the Noah girls play a secret game— Crushed. The rules are simple.
1. Use wisdom to pick your target. The boy can't be too weak or too strong-willed.
2. Blow the enchanted dust into your target's face to enchant (Crush) him.
3. Give verbal commands and assign them tasks to perform throughout the year. The more tasks completed, the stronger the witch's power grows.
4. At the end of the year, the witch with the most power wins cold, hard cash.
As if being a witch in high school isn't complicated enough, Kristen picks the wrong boy to Crush. Zach is tall, handsome, and a little scary. Her Crush spell isn't working on him like it has with the others. In fact, he is behaving the opposite of every other boy she's Crushed, hating her instead of adoring her. Something is definitely wrong. After someone attempts to kill her, Kristen realizes there is more at risk than a few hundred dollars. She may be betting with her life.

An edgy book for teens that spans the gap between YA and adult fiction.
Life after high school is tough enough without having to go 15 rounds with your inner demon.
Val Shapiro is just your ordinary, part-demon, teenaged vampire hunter with a Texas drawl. And a pet hellhound named Fang. Soon enough she finds herself deep in the underbelly of the city, discovering the secrets of the Demon Underground and fighting to save those she loves. Whether they love her back or not.
Amazon / Barnes / Kobo / Google Play