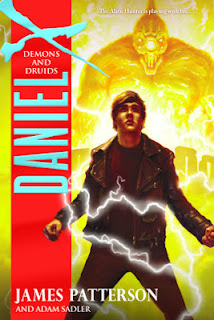 ﻿
Daniel X's hunt to eliminate each and every intergalactic criminal on Earth is always relentless, but this time, it's getting personal. Number Three on the List of Alien Outlaws takes the form of raging, soul-possessing fire. And fire transports Daniel back to the most traumatic event of his life-the death of his parents.

In the face of his "kryptonite", Daniel struggles with his extraordinary powers like never before, and more than ever is at stake: his best friends are in grave peril. The only way to save them is to travel back-through a hole in time-to the demon's arrival during the Dark Ages. Rip-roaring action and humor sets the pages afire in this gripping time-travel adventure with an Arthurian cast-and countless other surprises!

First thing I want to say is the book is about aliens but the authors were still able to get a vampire in there. Granted it was alien vampire but do you really have to stick it there?

The dragon scurried up the wall like a centipede, arched its neck, and took a bite out out of a coal deposit in the ceiling. The sound of grinding rocks echoed through the chamber. Pebbles as big as my clenched fists rained down from its jaw.

The plot was okay. I wish it was a little more thought out. It just seemed like they make Daniel out to be this great Alien Hunter that knows all the tricks. Then they almost kill him and make him have little control over his powers. And I get that it would suck to see your friends die, but they're not real and Daniel could just recreate them. Maybe that's a little mean.

The characters are almost exactly the same as the last two. Not a whole lot of growth. You find out Daniel is afraid of fire. Well, maybe they said that before but I don't remember. I wish Daniel's sister and his other friends were in it more. Though, you a couple interesting characters.

In truth, I'm actually kind of neutral about this book. I thought the first two were better. Will I read the next one? If the library has it. Do I recommend it? If you like the series.