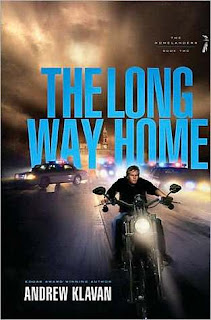 ﻿
Charlie West went to bed one night an ordinary high school student, but when he woke up, he was a hunted man. Terrorists are trying to kill him. The police want to arrest him for the death of his best friend. With his pursuers closing in on every side, Charlie makes his way back to his hometown to find some answers.

This series continues to be a surprise to me. I liked the first one a lot, and I might actually like this one more. So, any series that can do that is off to a good start.

The killer's body went spinning through the air. He landed with a thud that shook the floor, just a few yards away from me. The jar of the fall made him lose his hold on the knife, but he quickly grabbed it again.

The action starts on page one. It does slow down in middle of the book. But, it never completely comes to a stop, so it easily picks back up at the end. The mystery was there through out the book. You do find out a lot about the early part of the year Charlie lost, so that was nice.

There were more characters in this one, so you get to see Charlie interact with other teenagers. Josh is the smart one. He seems like the most useful. Rick and Miler are just some old friends that are there for support. Beth is Charlie's girlfriend and is pretty much the damsel in distress for Charlie.

Charlie was better in this one. He doesn't have long speeches of how great America is. He still believes that and he does say it, its just not the main thing he says. He seems a lot calmer, like he grew up a little in between the two books. He does doubt himself a little, which, in my opinion, makes him a little more believable.

The book was very solid. The writing was good. The plot was great. And the characters got better. It continued prettywell from the first book. It did end in a cliffhangr, but it did feel like an ending and it fit. There where a few thing that I didn't like, but nothing big and nothing worth metioning. So, I completely recommend this book and series.