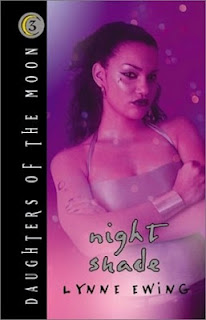 Jimena was once the toughest chola in East L.A. No longer in a gang, she is still feared by many. Nothing scares Jimena. Nothing, that is, except the reappearance of Veto, who was once the love of her life. That terrifies her, because Veto was killed a year ago by a rival gang. Or was he? Jimena discovers that he has made a devil's bargain, which could cost both of them their lives.﻿

It's fun reading a book from over ten years ago. Especially a fantasy. You can tell the differences from then and now. And plus this book was good.

Jimena clutched the table. She was afraid to let go for fear her trembling hands would reveal the depth of her concern. One desperate thought played through her mind. She had to find a way to keep Veto from falling into the bottomless pit.

The book is a lot like the first two. The plot is kind of similar. It did seem rushed at times. And not everything the characters did made sense. But the overall series plot did move forward, so that was good.

The characters all pretty much stayed the same. The only one that really developed was Jimena. You find out a little more about her past. And you do see a little more vulnerable side of her. Collin was also more important in this one.

Okay so this is a short review. If you liked the first two, then you'll probably like this one. The writing isn't perfect. The plot isn't perfect. And the characters were certainly not perfect. But the book was fun, and a good addition to the series. Will I read the next one? Maybe. But I do think you should look into this series.