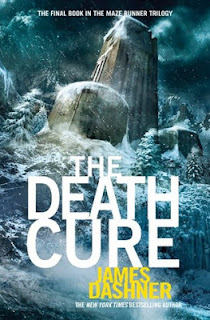 ﻿
Summary
Thomas knows that Wicked can't be trusted, but they say the time for lies is over, that they've collected all they can from the Trials and now must rely on the Gladers, with full memories restored, to help them with their ultimate mission. It's up to the Gladers to complete the blueprint for the cure to the Flare with a final voluntary test.

What Wicked doesn't know is that something's happened that no Trial or Variable could have foreseen. Thomas has remembered far more than they think. And he knows that he can't believe a word of what Wicked says.

The time for lies is over. But the truth is more dangerous than Thomas could ever imagine.
Will anyone survive the Death Cure?


﻿I loved the first one. Didn't like the second one but didn't hate it. This one falls in between.


the group held their heads up high and slowly walked to the gate, making sure not to do anything that would cause alarm. The last thing Thomas wanted was to be shot by a Launcher grenade again. As they got closer, he saw that the two guards looked worse up close.


Let's start with the characters. None of them really stood out to me. Thomas was a little annoying, and to me, at times selfish. Brenda pretty much went along with whatever Thomas said. Same with Jorge. Minho was the only one I actually liked. He's pretty much the same as he was at the start.


The plot wasn't bad. It was nowhere near perfect. And I wasn't that happy with some of the people who died or the why the did. I won't say who, but they are people who have been there since the begining. There was a few question that weren't answered. And it did leave me with a few more. I wish it was treated more like a last book than just another one in the series.


Other than that I don't have much to say. I believe there would have been better ways to end the series, but this wasn't bad. I wish we had more answers and more loose ends were tied up, but I liked the book. I recommend this book and series.