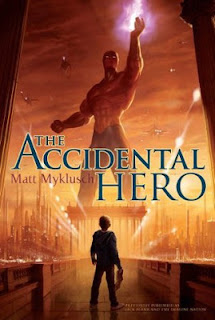 Summary
Jack Blank is an orphan, abandoned from birth at bleak, dreary swampland St Barnaby’s Home for the Hopeless, Abandoned, Forgotten, and Lost. Covertly reading old comic books is Jack’s only solace, until a real Robo-Zombie attacks and emissary Jazen whisks him to a secret island country "the Imagine Nation". But the super-heroes fear him as a threat.
Let's get right into the review. I love the world that Matt Myklusch created. I do wish the mythology was delved into a little more, but then again, it is only the first book in a trilogy. But otherwise, it was a magical and fascinating world. Something I could probably get lost in.
Now the characters. I loved them. Jack was a great main character. He starts out as a scared, quiet boy to a confident, strong character. Jazen, Blue, and the rest were good supporting cast. Smart was a fun mini villain. And Revile was great main one.
I will admit that the plot wasn't the most original. Though, there was plot twists near the end that I didn't see coming. Which was a nice change for once. So, yeah, not the most original story, but it was still entertaining and captivating.
Overall, I loved the book. Yes, it is aimed at younger kids, but I believe even adults can love it, too. Fans of superheros will probably enjoy this book. Fans of Harry Potter and Percy Jackson also might want to think about picking this one up. I highly recommend it.