{Book Blitz: Character Interview + Giveaway} When Fangirls Lie (How (Not) to be Seduced by Rockstars #1) by Marian Tee When Fangirls Lie (How (Not) to be Seduced by Rockstars #1) by Marian Tee
Publication Date: May 9th 2013
Genre: New Adult Contemporary
Goodreads
~Summary~
19-year-old Saffi March is not the perfect girl everyone thinks she is. When the pressure of pretending becomes too much, she escapes for a weekend and transforms herself into another persona - a hardcore groupie for the rockstar also known as Sweden's #1 Sex God, Staffan Aehrenthal.

One look at the beautiful girl hopelessly trying to hide her naïve virginal innocence behind skimpy dresses and garish makeup and Staffan immediately knows the groupie called "H" is hiding a secret. He also knows he needs her desperately. He's determined to make her his, the only girl who's able to soothe the demons in him.

But before Staffan can let Saffi into his life, those stars in her eyes have to go - and he'll do everything for that to happen, even if it means cruelly hurting Saffi until she realizes that he would never trust anyone with his heart again.
Purchase Links:
Amazon / Barnes
~Sequels~ When Fangirls Cry (How (Not) to be Seduced by Rockstars #2)

~Character Interview~
Sapphire “Saffi” March waved her hand in front of the laptop’s web cam, double-checked the speakers, and readjusted the lighting. This was her very first official fangirl interview, and she wanted everything to be perfect. She had even reserved this venue, with its beautiful whitewashed gazebo and serene atmosphere. Add the rainbow-colored flowers and shimmery lake behind them, and it was the best backdrop to emphasize the raw earthy power that made up Staffan Aehrenthal, one of the hottest rock stars in modern times as well as being Sweden’s #1 Sex God.
Sprawled like a pagan god on the cushioned seats, Staffan exuded the kind of attraction that would make any girl swallow and wonder if she was having a fever.
Although well-known for his sartorial elegance, Staffan was unusually casual in his choice of clothes for today’s interview, wearing only a long-sleeved polo shirt, its first few buttons undone to reveal a sexy hard pane of chest, and wonderfully tight jeans.
He had the looks of an angel, really, Saffi mused, but---
Staffan suddenly looked up from the list of questions she had asked him to study. “Are we doing this or not?” His fuck-me hazel eyes were the very devil, promising all kinds of illicit things that never failed to make a fangirl squeal.
Mesmerized mahi-mahi.
Staffan Aehrenthal’s laugh was as sinfully sexy as the rest of him. Saffi bit back an embarrassed groan, realizing that she had again inadvertently said the words out loud.
“It’s not that funny,” Saffi protested when Staffan kept laughing.
“It is when I remember the last time I tried to surprise you last night by arriving late in your dorm room and you shrieked ‘testicular telescopefish’---”
“I can’t help it! You were naked and we were---” Reddening at the memory, she begged, “Can we just please, please, please start with the interview?”
He smirked. “Only if you promise you’ll think up five new ones of those fishy expressions of yours while I fuck you with my mouth later.”
“Staffan!”
“Saffi!”
She glared. “Staffan!”
He only raised a brow. “Do you want the interview or not?” He glanced at the webcam, saying innocently, “If you don’t want to do it for me then do it for your fellow fan girls. Take one for the team---”
Saffi choked on her laughter. “You are so…” Shaking her head, feeling her heart spill over with sheer love for him, she mumbled, “Whatever you want. Let’s just please do this?” Not waiting for him to answer so that Staffan wouldn’t have time to tease her some more, she quickly pushed the recording button to start the interview.
“Thanks for letting us interview you. This means a lot to us fan girls. And as promised, we’ll just ask five questions because we know you’re super busy and all, with your ongoing recording sessions for your next album.” She cleared her throat, unable to help but feel nervous even though she was completely off-cam. How was it that she could easily handle an impromptu presentation on the ecological risks in the world of ichthyology before the state’s top academe but when facing her rockstar lover, she just went to pieces?
“Your first question…?” Staffan drawled, but his eyes were laughing at her.
Ah, drat. She had spaced out again!
Clearing her throat, she asked, “Boxer or briefs?”
“Naked.”
Blushing already at her second question, she mumbled, “Condoms or pills?”
He gazed at her under his lashes, a smirk playing on his lips as he answered, “Pills because I want to feel everything about the girl I’m fucking.”
Saffi crossed her legs. She was so---turned on! She coughed, trying to get herself in control. “Can you give us one word to describe your friendship with the other Pussketeers?” Staffan was friends with two other billionaires, and the media had taken to call them as such because of their legendary sexual exploits.
Saffi was surprised when Staffan grinned. “One word?”
She nodded.
“Pussy-whipped.” His eyes bored through hers.
Saffi coughed again. “Err, next question. Do you ever feel nervous when performing?”
Staffan’s voice became serious. “Not nervous, but I’m a perfectionist when it comes to my work. I…despise it when things don’t go my way completely.”
She nodded, having seen that herself. “Who do you think your greatest competition is right now?”
Staffan shrugged. “They can try, but right now I just don’t see if there’s anyone out right now who can beat me.”
She choked at his arrogance.
He asked silkily, “Do you disagree?”
“Err, of course not,” she said hastily. “Last question…” She paused, biting her lip.
Staffan frowned. “What is it?” He did not like the worried look on Saffi’s face, hated seeing her upset in any way.
She looked at him sheepishly, looking so adorably beautiful Staffan knew he would die if he did not get to touch her in the next minute. “It says here, what’s your favorite position to, err, you know?” Her voice was barely audible by the time she said the last two words, a remarkable thing, really, for someone who had once posed as “H”, the most promiscuous groupie who ever lived.
Staffan answered by flipping the laptop the other way around so its camera would record the ever-interesting view of the wall. Leaving the speakers on, Staffan lifted Saffi up from the armrest and dumped her on the cushions. Bending on one knee, he swiftly started working on her jeans.
“What are you doing?” Saffi gasped.
“Answering your question.”
END OF INTERVIEW
~About The Author~ 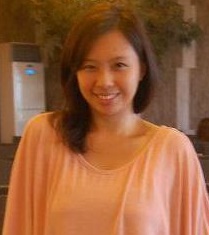 Hi! I’m Marian Tee – I write sexy funny romances, emphasis on the funny because most readers tell me my books are a public hazard, often causing them to laugh out loud and get funny looks from other people.
I’m from the Philippines, half Filipino and half Chinese with a love for all things Japanese! Yes, that rhymed.  I love dancing, travelling, watching horror movies and basketball, and reading Archie comics.

Of course I love reading books, too. In fact, if I’m a little too slow in releasing a new book, it’s probably because I’m too busy being a reader and forgot all about being a writer.  Yes, I know, MY BAD!

I am a frustrated MANGAKA, hence why I write novels like Drawn and why I have a Vampire Knight fan fic posted at FanFiction.net (just search for Morteia Chronicles).