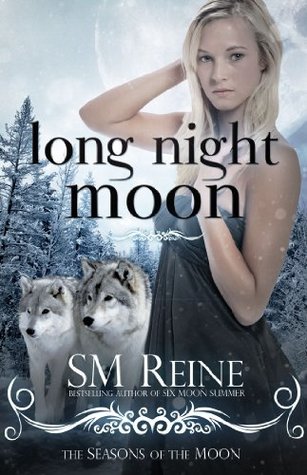 Long Night Moon (Seasons of the Moon #3) by S.M Reine
Publication Date: March 2nd 2012
Genre: Young Adult Paranormal
Pages: 183
Format: Kindle
Source: Free on Amazon
Goodreads
~Summary~
Something is killing innocent people around Rylie Gresham's town. The police think it's a wild animal, but she has other suspicions. There are new kids at school, and they have a lot in common with her: gold eyes, super strength, and a habit of turning furry. It seems Rylie's not the only werewolf around anymore.

It's up to Rylie and her werewolf-hunting boyfriend, Seth, to stop the killings. But saving lives doesn't come naturally to a monster, and territory battles could risk the life of her sickly aunt--not to mention her own. Rylie has no choice but to stand her ground, protect her home, and stop the murders before anyone else gets hurt.

LONG NIGHT MOON is a dark fantasy novel for young adult readers who enjoy a splash of horror with their paranormal romance.
~My Thoughts~

Um…okay.
I think the reason why I feel so, BLAH, about this book is because it’s been quite some time since I’ve read Six Moon Summer and All Hallows Moon, the first and second book in the series Seasons of the Moon by S.M Reine. However those books were so amazing, so refreshing, so….so good that truthfully they could leave me speechless! Which is why I was dying to read Long Night Moon, the third in the series.
It started off great! The first few chapters got me hyped and I was so excited to see where S.M was going to take Rylie this time! But as I got deeper into the story, that excitement started to fade and I don’t know, it got kinda cliché a little bit to me. I’m probably wrong but it felt like the common storyline to a lot of young adult books out there, the same formula. But again, that could just be me.
Long Night Moon, for me, lost some of its feistiness it had in the first two. And I feel like Rylie’s character changed so much in this one and not for the better. It’s like she became weaker when she was so tough in the first two books, it was actually really sad to see. I miss the old Rylie!
Overall, I felt like this happened before. Like, it wasn’t as original as the first two books and so I’m disappointed now. I’m actually happy my family didn’t buy this book for me as it was on my birthday/Christmas wish list. It fell flat and I get after a while, some sequels do that. It’s a normal thing but now my expectations for the last and final book in the series, Gray Moon Rising, is low. I’ll eventually get to it but I’m not dying to read it because I’m afraid it’ll turn out not like I want it to.
*shrugs* I just hope some of that feistiness comes back in the next book....

Gives you a good haunting
Sweet Readings Everybody!