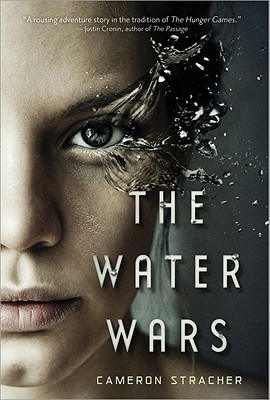 The Water Wars by Cameron Stracher
Publication Date: January 1st 2011
Genre: Young Adult Dystopian
Pages: 240
Format: Hardcover
Source: Library
Goodreads
~Summary~
Welcome to a future where water is more precious than gold or oil—and worth killing for Vera and her brother, Will, live in the shadow of the Great Panic, in a country that has collapsed from environmental catastrophe. Water is hoarded by governments, rivers are dammed, and clouds are sucked from the sky. But then Vera befriends Kai, who seems to have limitless access to fresh water. When Kai suddenly disappears, Vera and Will set off on a dangerous journey in search of him-pursued by pirates, a paramilitary group, and greedy corporations. Timely and eerily familiar, acclaimed author Cameron Stracher makes a stunning YA debut that's impossible to forget.
~My Thoughts~

If I was just starting out to read Dystopian and didn’t know the “formula” then I would have liked this. However, I’ve read plenty and know that “formula” so I just found this read a bit cliché. Though no matter how cliché it was there were some moments I did like. Like the character development and how the book started. The first scene was gripping and definitely pulled in the reader but once the real action began, that’s when everything went downhill for me.
The first 50 or so pages were great! I loved the character development, the blossoming romance, and this mystery surrounding the character, Kai. Yeah, sometimes I felt it was a bit of a drag in some areas as in some areas it felt like there was nothing really wrong in the world, you know? But I still enjoyed it and kept reading.
So when the main threat came into play, Kai going missing, I got excited and couldn’t put the book down! I just wanted to devour it! However, sadly, the same subplot line was on repeat. The siblings would get capture, then escape, then after like five seconds later they’ll get capture again and oh my god, I just wanted to pull my hair out!! I rolled my eyes every time they got captured and I started to lose interest in the book.
I know this being a standalone, things needed to move quickly. However, couldn’t you have changed it up a bit?
Overall, if this was my first Dystopian then I would probably have loved it. But as it’s not, I wasn’t a big fan. Nothing in the storyline stood out to me to make it original, the only thing that’s original about it is that it tied up nicely at the end.

Gives you a good haunting
Sweet Readings Everybody!