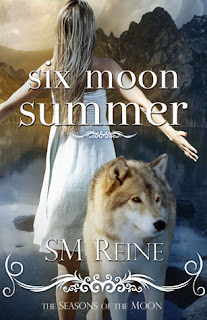 And now she has three months to find a cure before becoming a werewolf... forever.

Rylie Gresham hates everything about summer camp: the food, the fresh air, the dumb activities, and the other girls in her cabin. But the worst part is probably being bitten by a werewolf. Being a teenager is hard enough, but now she's craving raw flesh and struggles with uncontrollable anger. If she doesn't figure out a way to stop the transformation, then at the end of summer, her life is worse than over. She'll be a monster.


A fantastic book where things go bump in the night.
There's nothing pretty about being a victim of a wolf attack late at night and Rylie soon finds that out. Not only is Rylie living her summer in the fresh air but this book is a refreshing of words for the YA Paranormal genre. S.M Reine creates a beautifully real world that sadly gets turned to shreds in Rylie's eyes.
In the beginning I thought Rylie was being a slight baby. Complaining about everything, not going along with anything going on at the camp and I didn't like her because of this. However, after the attack she started to grow stronger (pun not intended). She started to mature as the book went on and then I started to fall for our main heroine.
And when she went through her changes. Omigod, they were crazy. The details S.M Reine wrote during these scenes were amazing. I was cringing, imaging that exact same thing happening to me and it gave gives me the chills. Truly beautiful if you like the creeps. I think out of all the books I've read only one other described a painful change, the rest either sugar coated or didn't even explain them at all. Personally, I like the explaining ones.
Now through these changes she has a little help from a friend. His name is Seth and throughout this book I thought there was something suspicious about him. And there is, but that's a secret I will not speak of, you'll just have to get this book to find out. At first I didn't fall head over heels for him. However at the end of the book when we got to see through his eyes, I did! And I can't wait to get to the second book. Thankfully I got it the same time I got the first one- when they were both free.
Overall this is one fun staggering read. All the characters work well for me. The mean girls, the counselors, the friends (loved that scene, once again a secret), the other werewolves. Truly an incredible story. A favorite one for this year.
Oh, and I loved S.M Reine unique twist with the moons. We mostly get full moon you change. But in the beginning of transitions from human to wolf, you aren't able to be just afraid of one moon anymore.