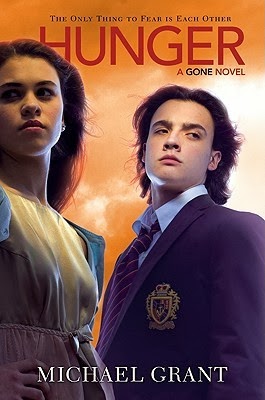 Summary
It's been three months since everyone under the age of fifteen became trapped in the bubble known as the FAYZ.

Three months since all the adults disappeared. GONE.

Food ran out weeks ago. Everyone is starving, but no one wants to figure out a solution. And each day, more and more kids are evolving, developing supernatural abilities that set them apart from the kids without powers. Tension rises and chaos is descending upon the town. It's the normal kids against the mutants. Each kid is out for himself, and even the good ones turn murderous.

But a larger problem looms. The Darkness, a sinister creature that has lived buried deep in the hills, begins calling to some of the teens in the FAYZ. Calling to them, guiding them, manipulating them.

The Darkness has awakened. And it is hungry.
I am torn on this book. I'm giving the book a 3.5 because when the book is at it's best, it's really good. But when it's not, it can be a little hard to get through.
Okay, so the plot. The plot was okay. The main plot and a few subplots were cool and great. But the rest was just filler and it made the book feel crowded. Like when they're fighting at the power plant and they cut to Brianna killing and eating a pigeon. Doing things like that probably is why the book is so long. And I still don't get the whole "Darkness" thing. The book is so crowded that they don't need the added problem of the "Darkness". But that's the main villain of the series so I guess it has to bee there.
The funny thing is that I thought the first book was slow for the first hundred pages. That is the opposite for this book. I thought that the book started strong. But about halfway through the book, I started to get, well, bored. I just wanted it to get to the point. The ending was good. But it couldn't help the two hundred pages of filler that just made the book drag.
I had a similar problem with the characters that I had with the plot: it was too crowded. There were too many characters. And so many characters with similar names. I, mean, there's Brianna and Brittney, Mike and Mickey, Harry, Hunter, and Hunk. And sometimes, because they are written similarly, if it switch between characters with similar names, it would take me a few paragraphs to realize they switched. Another problem I have with so many characters was that there are characters that you could take out and the book wouldn't change. A few of them are: Brittney, Mary, Quinn, and Taylor.
Now the main characters. I was actually disappointed in most of them. They ether stayed the same as the first book or they got worse. Sam got worse. He was all self-pitying and self-doubt paired with his do-gooder and do no wrong attitude and he was just annoying at times. Astrid got worse. She was just Sam's girlfriend. Caine, Drake, Edilio stayed the same. Diana was one of the few I think got better. Her development was great and that probably was because she got a bigger role. Dekka and Jack also got bigger roles and also was better in this book.
It might sound like I'm not the happiest with the book, but I did like it. I did like the first book, Gone, better, but I will recommend this book. I actually think it has less problems then Gone, but Hunger's problems are just bigger and hit me in a worse way. But if you like Gone, you'll like this one, too. And I will probably pick up the third book, Lies.